Fukushima Thyroid Examination December 2016: 145 Thyroid Cancer Cases Confirmed (101 in the First Round and 44 in the Second Round)

On December 27, 2016, the 25th Oversight Committee for Fukushima Health Management Survey convened in Fukushima City, Fukushima Prefecture. Among other information, the Oversight Committee released the latest results (as of September 30, 2016) of the second and third rounds of the Thyroid Ultrasound Examination (TUE). Official English translation of the results is posted here. The narrative below presents basic facts from the new data in perspective, including information covered during the committee meeting and the subsequent press conference.

Although the final reporting of the second round screening results was widely anticipated at this Oversight Committee meeting, it was revealed that the confirmatory examination was still ongoing and the results were incomplete.

Since the last results were released, 10 additional cases from the second round have been operated on. All 10 cases were confirmed as papillary thyroid cancer during the post-surgical pathological examination of the resected thyroid gland tissue.

Meanwhile, the third round screening (the second Full-Scale Screening) which began on May 1, 2016, is scheduled to run through March 2018--the end of Fiscal Year 2018. As of September 30, 2016, 49,387 have participated in the primary examination out of the survey population of 336,609 residents, at the participation rate of 14.7%. So far 211 have been determined to require the confirmatory examination. Results of the confirmatory examination were not available as it only began on October 1, 2016 and the TUE results released at this Oversight Committee meeting covers data up to September 2016.

In some cases, confirmatory examinations from the second and third rounds might be simultaneously ongoing, or there could be significant delays in conducting confirmatory examinations due to logistical issues such as the lack of manpower. A two-year screening period originally designed for subsequent rounds of the Full-Scale Screening is essentially spread over a longer time period, overlapping with the next round of screening. A precise interpretation of results from each round of screening might be nearly impossible.

Full-Scale Screening (first and second)
To be conducted every 2 years until age 20 and every 5 years after age 20, the Full-Scale screening began with the second round screening (first Full-Scale Screening) in April 2014, including those who were born in the first year after the accident. There are 381,282 eligible individuals born between April 2, 1992 and April 1, 2012. As of September 30, 2016, the participation rate remained the same as 3 months earlier at 70.9% but lower than 81.7% at the first round screening, with 270,454 actually participating in the primary examination. Results of the primary examination have been finalized in 270,431, and 2,222 (increased by 5 since the last Oversight Committee meeting) turned out to require the confirmatory examination.

The confirmatory examination is still ongoing for the second round. Of 2,222 requiring the confirmatory examination, 1,685 have participated at the participation rate of 75.8% (increased from the previous 66.6% but still lower than 92.8% from the first round screening), and 1,553 have received final results including 189 that underwent fine-needle aspiration cytology (FNAC). FNAC revealed 68 cases suspicious for cancer. Confirmation of thyroid cancer requires pathological examination of the resected thyroid tissue obtained during surgery. As of September 30, 2016, 44 underwent surgery and 43 were confirmed to have papillary thyroid cancer. One remaining case was confirmed to have "other thyroid cancer" according to the classification in the seventh revision of Japan's unique thyroid cancer diagnostic guidelines. A specific diagnosis was not revealed, but Akira Ohtsuru, in charge of the thyroid screening, confirmed that it was neither poorly differentiated thyroid cancer nor medullary cancer. He has previously mentioned it was a differentiated thyroid cancer that is not known to be related to radiation exposure.

Newly diagnosed cases in the second round
In the second round, 9 cases were newly diagnosed by FNAC with lesions suspicious of cancer. They were 3 females (ages at exposure: 11, 14 and 15) and 6 males (ages at exposure: 7,10, 11, 12, 12 and 16). Their places of residence at exposure (with the number of individuals in parentheses) include FY 2015 target municipalities of Fukushima City (2) and Shirakawa City (1) and FY 2016 target municipalities of Iwaki City (2), Tanakura Town (1) and Kitakata City (3).

The youngest individual newly diagnosed with suspected cancer was age 7 at the time of the accident. The lack of surge in cases in younger patients aged 0-5 at exposure in the first 4-5 years since the Fukushima nuclear accident is regarded by Fukushima Medical University as one of the reasons denying Fukushima thyroid cancer cases being radiation-induced. However, it was after the first 4 years since the Chernobyl accident that thyroid cancer cases in those aged 0-5 at exposure dramatically increased. This underscores the importance of continuing screening to follow the trend in this age group. No determination could be logically made regarding radiation effects based on the lack of patients who were ages 0-5 at the time of the Fukushima accident. (See this for more information).

This means 55 of 68 cases or 81% of the second round cases suspected or confirmed with cancer had no lesions detectable by ultrasound in the first round. It has been speculated by some that these 55 cases were new onset since the first round, suggesting the cancer began to form in 2 to 3 years after the first round screening. This would seem to conflict with the common notion that thyroid cancer in general is slow growing.

Ohtsuru emphasized that there were no missed diagnosis in the first round. Rather these 55 cases might comprise newly detected lesions that were simply undetectable by ultrasound in the first round. He firmly denied these were newly formed lesions. He also stated it wasn't clear if they were previously invisible, which is the expression he used in earlier meetings.

Other physicians in the committee, Akihito Horikawa (Futaba County Medical Association president) and Kazuo Shimizu (a thyroid surgeon), concurred with the idea that some lesions might have been simply undetectable even with the use of highly sensitive equipments, although Shimizu did not seem to completely disregard the possibility of new onset lesions. It seemed that the expression of "missed diagnosis" was avoided in honor of considerable efforts made by those actually conducting the ultrasound screening. It is possible some of the ultrasound images are overread at the diagnostic subcommittee with undisclosed members discussing some of the cases in closed meetings, but so far no concrete evidence has been given to confirm such activities.

Towards the end of the press conference, Mako Oshidori sharply asked why there has been no evaluation regarding the female to male ratio in the Fukushima thyroid cancer cases. (For the transcript of her question in Japanese, see here). She pointed out that Kazuo Shimizu, a committee member and thyroid surgeon, has asked questions regarding the female to male ratio issue multiple times in the past three and a half years. In fact, Ohtsuru responded to an earlier question by Shimizu during this meeting that the female to male ratio issue is yet to be evaluated by Fukushima Medical University and that the committee meeting was simply a place where results were presented.

In his monologue, Chairman Hoshi went on to propose an establishment of an "international, third-party, neutral, scientific, up-to-date and evidence-based" expert committee that would discuss issues surrounding the TUE and present information in a manner that would aid the "understanding by Fukushima residents." This proposal appeared to be taken from the item number 4 of the recommendations "to convene the expert working groups on 'Nuclear Disasters and Health Monitoring,' especially focusing on thyroid problems, could provide professional recommendations to the current TUE in Fukushima in the future."

Chairman Hoshi proceeded to have some of the committee members explain how third-party evaluation committees function at the Radiation Effect Research Foundation (RERF) and the National Institute of Radiological Sciences (NIRS). This clearly came as a surprise to those who were asked to make presentations on the spot, creating a slightly uncomfortable atmosphere.

Regarding the future status of the TUE
The recommendations by The 5th International Symposium include clauses such as:

"(...) thyroid screening of people who do not have symptoms of possible thyroid disease has the potential to do more harm than good to the population, and should only be carried out, when clear benefits to the population can be defined."

"Participation in the health surveys and the thyroid screening program should be voluntary."

It should be noted that the recommendations did not consider opinions by Chernobyl researchers such as Yuri Demidchik from Belarus, Tetiana Bogdanova from Ukraine and Pavel Rumiantsev from Russia, whose presentations at the symposium made clear that thyroid ultrasound screening is beneficial, since their names are not included in the list of invited experts who were consulted.

For record, participation in the health surveys and the TUE has always been voluntary yet strongly encouraged. On September 13, 2016, the Fukushima prefectural assembly unanimously voted to support a bill introduced to maintain the current status of TUE rather than reducing its scale. (See Bill #63 in this PDF). However, a concern has been raised by an FMU physician, Sanae Midorikawa, that an individual's desire for non-participation should be honored in view of the fact thyroid cancer screening is unlikely to reduce mortality--the purpose of most cancer screenings. Midorikawa worries more about the mental effects of cancer diagnosis. (See this post for the background information and an official translation of a newspaper article. Official translation is found here).

However, all this talk about making it easy for residents to opt out of the health surveys and the TUE is based on the assumptions that radiation effects are unlikely in Fukushima due to much smaller radiation exposure doses than Chernobyl and that the age distribution of those diagnosed with thyroid cancer--including only 1 case exposed at age 5--differs from Chernobyl where many cases were diagnosed in those who were aged 5 or younger at exposure.

Moreover, the clinical information of cancer cases is not taken into consideration. In fact, clinical data is not willingly released citing the privacy protection of the patients. Shinichi Suzuki's presentation at the 5th International Symposium came as a surprise (see this post for details). Concerning clinical features include:


It is precisely these clinical features that should be discussed at the Thyroid Examination Evaluation Subcommittee, given the fact there are many unknowns about thyroid cancer in children and young adults diagnosed by screening before clinical symptoms appear.

The 311 Fund for Children with Thyroid Cancer approved 35 of 36 application received so far (one rejected application was for a benign thyroid tumor that required surgery). Thirty-five approved cases included 26 cases from Fukushima and 9 cases outside Fukushima: 1 case each from Miyagi, Gunma, Chiba, Saitama, Nagano and Niigata, and 3 cases from Kanagawa. There were 14 males and 21 females, with the current age ranging from 10 to 25 years. In the 9 cases outside Fukushima, 87% had lymph node metastasis and 90% had total thyroidectomy. Three of 9, all from different prefectures, had lung metastases and undergoing a radioactive iodine ablation treatment, which qualifies them for an additional 100,000 yen.

Moreover, it was revealed that 2 of 26 cases from Fukushima developed symptoms after the prefecture-run TUE cleared them of and sought further medical care on their own, disqualifying them from receiving a financial support from Fukushima Prefecture.

Conclusion
It seems important to continue the TUE and even extend it outside Fukushima Prefecture, but it is also critical that the Thyroid Examination Evaluation Subcommittee be reconvened to review the data.

＊＊＊＊＊
Below is the summary of the basic information from each round of screening.

Table 6. Cytology results (including information from Appendix 6: Number of surgeries among cases with malignancy or suspicion of malignancy) as of September 30, 2016 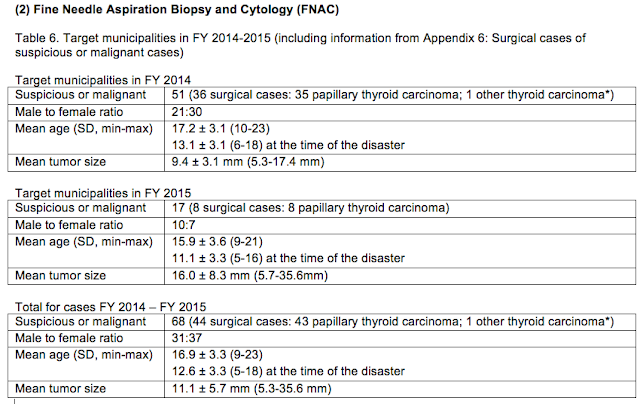 Overview      On October 15, 2021,  t he 43rd session of the Oversight Committee  for the Fukushima Health Management Survey (FHMS) convened... 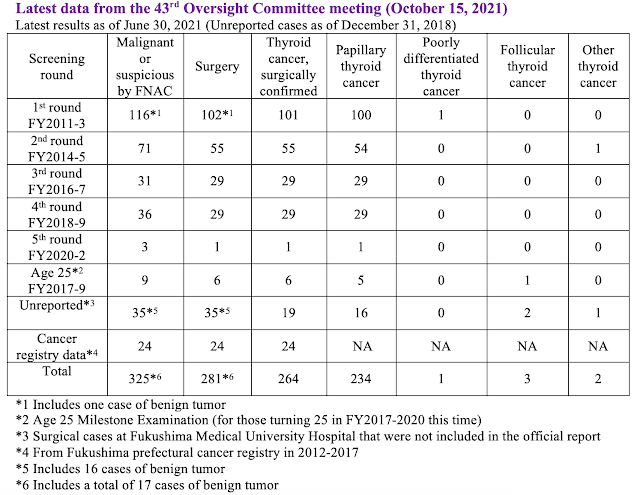