Among other information, the Oversight Committee released the latest results (as of September 30, 2015) of the ongoing Full-Scale thyroid examination, or the second round screening, which is being conducted over a two-year period from April 2014 to March 2016. Although the "final" results of Initial Screening, or the first round screening, were released at the last Oversight Committee meeting held on August 30, 2015, the secondary examination and surgical confirmation are still ongoing, and a few new additional results were orally presented. (Initial Screening is now officially called "Preliminary Baseline Screening," on the assumption that this post-exposure data reflect the baseline pediatric thyroid cancer occurrence in Fukushima Prefecture. Incidentally, Shunichi Yamashita et al. go so far as calling the first round screening results the "gold standard.")

An official English translation of the results will be available here. The narrative below contains some information gathered from the live webcast of the Oversight Committee meeting and the subsequent press conference.

Initial (Preliminary Baseline) Screening (the first round screening) targeted about 368,000 individuals who were age 18 or younger, residing in Fukushima Prefecture at the time of the Tokyo Electric Fukushima Daiichi nuclear power plant accident on March 11, 2011. There were 300,476 actual participants in the primary examination, giving rise to the participation rate of 81.7%. There are 114 malignant or suspicious cases, including the post-surgically diagnosed benign nodule: 101 underwent surgery and 100 were confirmed with thyroid cancer (97 papillary thyroid cancer and 3 poorly differentiated thyroid cancer).

Full-Scale Screening (the second round screening), to be conducted every 2 years until age 20 and every 5 years after age 20, additionally targets those who were born in the first year after the accident, aiming to examine approximately 385,000 individuals in a 2-year period. As of September 30, 2015, about 200,000 have participated in the primary examination of the second round screening at the participation rate of 52.6%. 182,547 have received confirmed results of the primary examination, and 1,483 turned out to be eligible for the confirmatory examination. Of 1,023 who actually underwent the confirmatory examination, 879 received confirmed results including 124 that underwent fine-needle aspiration biopsy/cytology. Suspicion of thyroid cancer was found in 39. Confirmation of thyroid cancer requires pathological examination of the resected thyroid tissue obtained during surgery. As of September 30, 2015, 15 underwent surgery and all 15 were confirmed to have papillary thyroid cancer.

Dr. Akira Otsuru, the head of thyroid ultrasound examination program, orally presented information from the ongoing secondary examination of the first round, mentioning one new malignant or suspicious case and 2 surgically confirmed cases. No details are known about the single new malignant or suspicious case from the first round, such as age, gender, or municipality of residence. It is also not known how many cases were still pending results of the confirmatory examination.

In the previously A1 cases, cancer most likely appeared newly, as by definition A1 had no ultrasound findings. Dr. Otsuru did confirm there were no ultrasound findings for A1 cases. However, Dr. Otsuru also mentioned nodules would have to grow to be about 5 mm in diameter, or even 10 mm in some cases, to be detectible by ultrasound, although cysts could be detected beginning at 1 mm in diameter. In private conversation with other physicians, Dr. Otsuru was quoted to have said there might have been very small nodules present that were undetectable by ultrasound, insinuating it was neither missed diagnosis nor new lesion. However, this seems to be illogical as Fukushima Medical University claims the ultrasound equipment being used is highly sensitive and capable of detecting very small lesions.

The question is how many of the 18 A2 cases might have developed new lesions since the last screening: if the A2 diagnosis was for nodules, they could have been precancerous lesions, but cysts are usually not expected to turn cancerous unless there was a solid component within (however, cysts with solid components are considered nodules in the Fukushima thyroid examination protocol). According to Dr. Akira Otsuru, none of the cases had missed diagnoses in the first round, and 5 of the 18 A2 cases were nodules, with the remaining 13 being cysts. This means 32 cases (19 A1 cases and 15 A2 cases with cysts) had new suspicious/malignant lesions develop in the last 2-3 years since the first round screening.

As for the 2 cases which previously were diagnosed with B assessment, Dr. Otsuru said they had been followed in regular medical care, without fine-needle aspiration biopsy/cytology, after the first round examination, when it was time for them to undergo the second round examination.

Number suspicious or confirmed of malignancy: 114 (including one case of benign nodules)
Number with confirmed tissue diagnosis after surgery: 101

Unofficial translation of the selected tables from the Full-Scale Screening

Table 2. Number and proportion of children with nodules/cysts as of September 30, 2015

Table 4. Changes in the results of Initial Screening and Full-Scale Thyroid Screening Program (as of September 30, 2015)

Table 5. Confirmatory testing coverage and results as of September 30, 2015

Table 6. Cytology results (including information from Appendix 6: Number of surgeries among cases with malignancy or suspicion of malignancy) as of September 31, 2015

Figure 3. Distribution of suspicious/malignant cases by age (as of March 11, 2011) and sex (females in white and males in gray)

Figure 5.  Effective doses of those who submitted basic survey questionnaire (females in white and males in blue) as of September 30, 2015 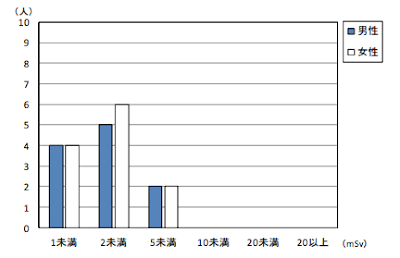