The following is an unofficial English translation of a handout regarding previously unreported thyroid cancer cases which was distributed at the Tenth Thyroid Examination Assessment Subcommittee held in Fukushima City, Fukushima on July 8, 2018. A PDF version on Scribd is shown first, followed by actual text and some pertinent notes to put the information in perspective.
July 16, 2018 Update: Corrections were made regarding the total number of cytologically suspected thyroid cancer (corrected from 201 to 211) and the total number of surgical confirmed thyroid cancer (corrected from 174 to 173) in the Notes section. A table of the latest results was also added.

Survey Results Regarding Thyroid Cancer Cases Excluded From the Official Report of the Thyroid Ultrasound E... by Yuri Hiranuma on Scribd

【Background】
Media coverage of a thyroid cancer case not previously reported to the Fukushima Health Management Survey (FHMS) Oversight Committee prompted a question regarding a  possibly numerous existence of similarly unreported cases diagnosed outside the framework of the Thyroid Ultrasound Examination (TUE).

【Methods】
1. Obtained an approval by the FMU Ethics Committee.
2. From the target population* for the TUE, a complete list was created of patients who underwent thyroid cancer surgery between October 19, 2011 and June 30, 2017.
*Individuals who were in Fukushima at the time of the accident who were born between April 2, 1992 and April 1, 2012.
3. For each patient, an inquiry was made with the Division of the TUE, the Department of the FHMS, Radiation Health Science Center, to determine if the patient participated in the TUE.
4. For each patient in the complete list created in Method 2, confirmation was made whether the case was included in or excluded from the official report of the TUE, as determined in Method 3.

In general, the official report includes cases that undergo the primary and confirmatory examinations as well as surgery at the FMU Hospital or non-FMU medical facilities cooperating with the FHMS.

This survey revealed that 3 of 11 cases never participated in the TUE. It was not clear if these 3 individuals sought medical care because they had some symptoms or if they were simply concerned about the potential risk of thyroid cancer.

As of June 30, 2017, the number of surgically confirmed cases was officially reported to be 154 (101 in the first round, 50 in the second round, and 3 in the third round), excluding one benign case. Of 158 surgeries that were conducted at the FMU Hospital as of June 30, 2017, 147 are included in the official report. This means 7 of 154 cases underwent surgery at medical facilities not affiliated with FMU. The FMU thyroid surgeon Shinichi Suzuki previously reported at the September 2016 conference that 132 surgical cases as of March 31, 2016 (102 from the first round and 30 from the second round) included 126 undergoing surgery at the FMU Hospital (including one benign case) and 6 at other facilities. This means that between March 31, 2016 and June 30, 2017, only one additional surgery was conducted at other facilities.


For more detailed information on the Fukushima Thyroid Examination itself, see the September 2017 fact sheet (long version, or e-published PDF)

On June 18, 2018, the 31st Oversight Committee for Fukushima Health Management Survey (FHMS) convened in Fukushima City, Fukushima Prefecture. Among other information, the Oversight Committee released the latest results (as of March 31, 2018) of the third round of the Thyroid Ultrasound Examination (TUE). For the first round, a 3-page summary of the final results was released. For the second round, the final results were previously released at the Eighth Thyroid Examination Assessment Subcommittee held on November 30, 2017, but it hasn't been translated into English. Also, a FY2017 update to the final results of the second round was released. (Final results for the first round have been updated at the end of each fiscal year, March 31.) Official English translation of the results is posted here. (As of July 20, 2018, only the third round results have been translated into English.)

Since the 29th Oversight Committee held on December 25, 2017, Fukushima Medical University (FMU) has released a 4-page summary of all 3 rounds conducted so far, "The Status of the Thyroid Ultrasound Examination." This summary has proven quite useful, listing key findings from the primary and confirmatory examinations as well as the surgical information. In particular, any update to the number of surgical cases is reflected in this summary before the information is compiled in the fiscal year update. There is no official English translation of this summary, but here's an unofficial translation.

Status of the Thyroid Ultrasound Examination (June 18, 2018) by Yuri Hiranuma on Scribd


Key points from the Oversight Committee:
New Director of the TUE
It was a surprise not to see Akira Ohtsuru at the Oversight Committee session. Ohtsuru began to report the results of the TUE at the 19th Oversight Committee on May 18, 2015, replacing Shinichi Suzuki, a thyroid surgeon at FMU. It was explained at the time that Suzuki was to concentrate on the clinical (surgical) aspect of the TUE, but it definitely led to a loss of access to a first-hand account from the surgeon directly involved with medical care of the thyroid cancer patients. Unlike Suzuki, Ohtsuru would not slip out heavily guarded clinical information. Actually, unlike Suzuki's smooth talking, it was apparently difficult to hear Ohtsuru even in the room even though he used a microphone. Now, a baton has been passed to Hiroki Shimura, Chairman of Department of Laboratory Medicine at FMU. This time there was no problem making out what was being said.

The decline in successive rounds (39.6% to 14.8% to 5.6%) was previously explained to reflect some participants repeating the confirmatory examination and not necessarily requiring repeat cytology. A big drop during the first round from FY2011 to FY2013 has been attributed to a more chaotic situation in the first year of the first round leading to cytology performed with abundance of caution. This time Shimura supplemented the explanation by stating that as examiners gained more experience, they were more comfortable with determining the need for cytology for each case. This statement drew multiple questions especially from members of the press regarding if the examiners were strictly adhering to the diagnostic guidelines.


The TUE support program
A fiscal report on the TUE support program sheds some light on the existence of several thyroid cancer cases not included in the official tally. (See the section below for background information.) This program offsets out-of-pocket medical expenses (30% copay) incurred due to participation in the TUE, if all 3 eligibility criteria are met: 1) participation in the TUE, 2) requiring a follow-up observation or medical treatment for conditions such as thyroid nodular lesions if they were detected during the TUE confirmatory examination, and 3) receiving or having received outpatient and/or inpatient medical care at medical facilities authorized to conduct the TUE confirmatory examination or other medical facilities referred by such authorized facilities. The TUE support program excludes those receiving full medical assistance such as those ages 18 and under living in Fukushima Prefecture or those on welfare.


Thyroid cancer cases diagnosed outside the framework of the TUE
It has been known that the official tally of thyroid cancer cases is far from complete partially due to a loophole in the study design that is not conducive to a compilation or release of "clinical" information once the suspicious cases move from the specially-funded TUE to regular medical care during the confirmatory examination. That is, if a suspected cancer is diagnosed directly during the confirmatory examination, it is included in the official report. However, cases might not need cytology urgently but warrant closer follow-ups such as every 6 months to 1 year rather than the next screening cycle 2 years later. Such cases are moved to a "clinical follow-up track" under the national health insurance, and FMU has been extremely reluctant to release detailed clinical information citing privacy protection. (This is explained in the Transparency and Integrity of Data section of the September 2017 fact sheet.)

In some cases, participants might voluntarily go outside the framework of TUE either from the beginning or the middle of the screening. This happens when they decide to undergo the primary and/or confirmatory examination at non-FMU medical facilities for various reasons—for instance, physical (evacuation or relocation due to schooling/jobs) and/or psychological (distrust). One such case, discussed in this post, revealed an existence of a cancer case in a 4-year-old boy (age at the accident time).

Due to repeated requests from the press as well as the committee members to gather cancer cases diagnosed outside the TUE framework, FMU has been conducting a study since late 2017, investigating how many of the surgical cases at FMU are actually from the "clinical follow-up track." No report was made on this matter at this Oversight Committee session. This "study" is being conducted by Thyroid and Endocrine Center in Fukushima Global Medical Science Center at FMU. It should be noted this study will not collect any information on surgical cases at non-FMU facilities.

As described in the section above, the TUE support program fiscal report reveals 3 thyroid cancer cases diagnosed in the clinical follow-up track as well as 2 cases diagnosed totally outside the TUE system. Because the TUE support program is only offered to those aged 18 and above, it gives no information on any clinical follow-up or non-TUE cancer cases in children younger than age 18. We know at least one such case as in the then 4-year-old mentioned earlier. 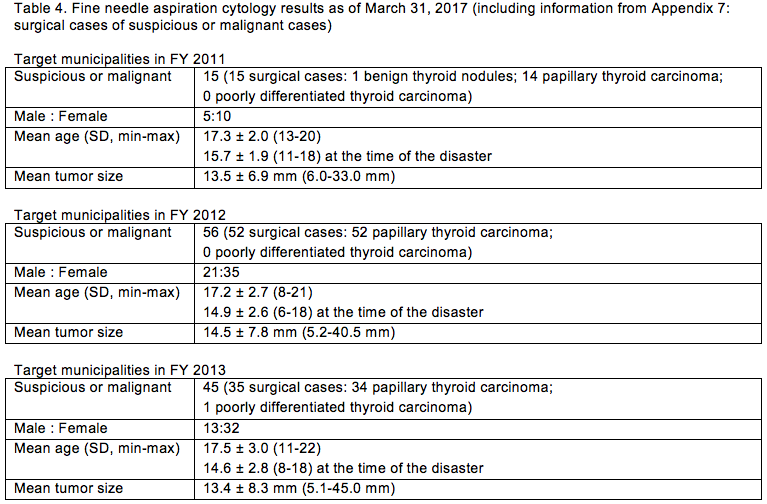 The second round results
No change since the last Oversight Committee meeting on March 5, 2018. 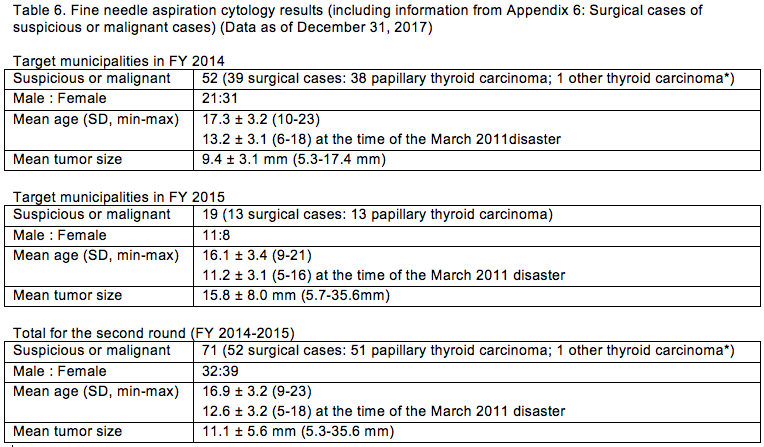 Table 1 shows that the participation rate of the primary examination is extremely low at 8.4%. Nearly one-third of 1,846 whose primary examination results are complete had not participated in previous TUE, shown as 577 "non-participants" in Table 3. It should be noted that nearly one-third of 80 subjects with "B" assessment requiring confirmatory testing came from these 577 subjects who never participated in the TUE.

Table 2. Number and proportion of children with nodules/cysts as of March 31, 2018