*See this post for various issues surrounding Fukushima's Thyroid Ultrasound Examination (TUE) data.
**Made corrections and clarifications in description of "FY" in the Age 25 Milestone Screening section. (September 28, 2019)
***Table for The latest overall results including "unreported" cases was replaced with a corrected version showing that Age 25 Milestone Examination was conducted in FY2017-8, not FY2016 as stated in the original version. (September 28, 2019)
****Status of the Thyroid Ultrasound Examination PDF was updated to reflect the correct number of surgical cases (18, not 15 as previously shown) for the third round. (October 9, 2019) 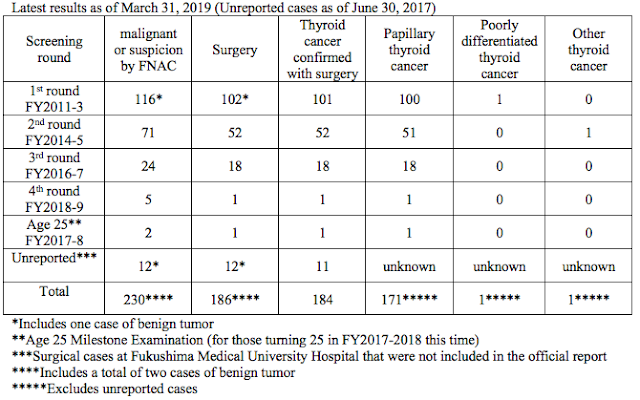 (See this post for details of the "unreported" cases.)

Overview
On July 8, 2019, the 35th Oversight Committee for Fukushima Health Management Survey (FHMS) convened in Fukushima City, Fukushima Prefecture. Agenda included various fiscal reports from FY2018 (April 1, 2018 to March 31, 2019).
Among other information, the Oversight Committee released the latest results (as of March 31, 2019) of the third and fourth rounds of the Thyroid Ultrasound Examination (TUE). Also released were the biannual results of Age 25 Milestone Screening. Official English translation should eventually be available here. (Note: English translation for the December 27, 2018 meeting was posted online on April 5, 2019, over 3 months later.)

Summary on the current status of the TUE
A five-page summary of the first through fourth rounds as well as the Age 25 Milestone Screening, "The Status of the Thyroid Ultrasound Examination," lists key findings from the primary and confirmatory examinations as well as the surgical information. This summary is not translated into English officially, but here's an unofficial translation. (Note: This translation has an additional pieces of information—the average age and tumor diameter for the FNAC results of the fourth round—which were not included in the original Japanese version.)
Status of the Thyroid Ultrasound Examination by Yuri Hiranuma on Scribd

Key points from the Oversight Committee

The interim report on the second round results
The interim report, finalized at the 13th Thyroid Examination Assessment Subcommittee held on June 3, 2019, was presented and discussed. (See the previous post for unofficial translation of the draft version.) The final version varies very little from the draft version, with an addition of "and prospective" to the second to the last sentence as follows:

Further, in the future, estimated thyroid exposure doses should be used in case control and prospective studies with confounding factors adjusted, in order to evaluate an association between doses and thyroid cancer incidence rates.

Discussion mainly revolved around the decisive nature of the phrase, "Thus, at this time, no association is seen between thyroid cancer detected in the second round and radiation exposure," which was considered too premature by multiple committee members. Their opinions were complied in a supplementary document, but not reflected in the final version of the interim report.

The participation rate remains low at 7.1%. Many might be either forgoing the TUE altogether or undergoing it at their local medical facilities rather than returning to Fukushima. Fukushima Medical University (FMU) does have affiliation agreements with 120 non-Fukushima medical facilities nationwide (see the list in Japanese), but these young adults with busy schedule might choose more convenient locations outside the list.

Officials intend to rely on cancer registry data to supplement data, but it may not be easy or adequate as described below.

The 2016 National Cancer Act mandates collection of cancer data nationwide. Hospitals (≥ 20 beds) are required to report cancer data, but clinics (≤ 19 beds) need to be voluntarily "designated" by prefectures in order to report cancer data. This loophole implies that the cancer registry data might not to be as exhaustive as it should be.  (See the National Cancer Center website for more information in English.) It is also conceivable that some "clinics" could function as a shelter for unreported cancer cases.

Results from the previous screening
Below is information on previous assessments of the suspected/confirmed thyroid cancer cases. In the second round, 33 of 71 cases were assessed as "A1" meaning there were no ultrasound findings. Thirty-two were assessed as "A2" with ultrasound findings of nodules ≤ 5.0 mm and/or cysts ≤ 20.0 mm, 5 were assessed as "B" with nodules ≥ 5.1 mm and/or cysts ≥ 20.1 mm. Of 32 with A2, 25 had cysts. Having previous assessments of "A1" or "A2 cysts" means there was no precancerous lesion during the prior TUE, i.e., cancer supposedly appeared since the prior TUE. (Note: FMU claims the cancerous lesions were simply "invisible" during the prior TUE.)