Fourteenth Prefectural Oversight Committee convened on February 7, 2014, releasing the results of the latest thyroid examination as part of the prefectural health management survey.

English translation of the results is available here.

A summary of the results is provided below:

Summary of fine-needle aspiration biopsy results (as of December 31, 2013) 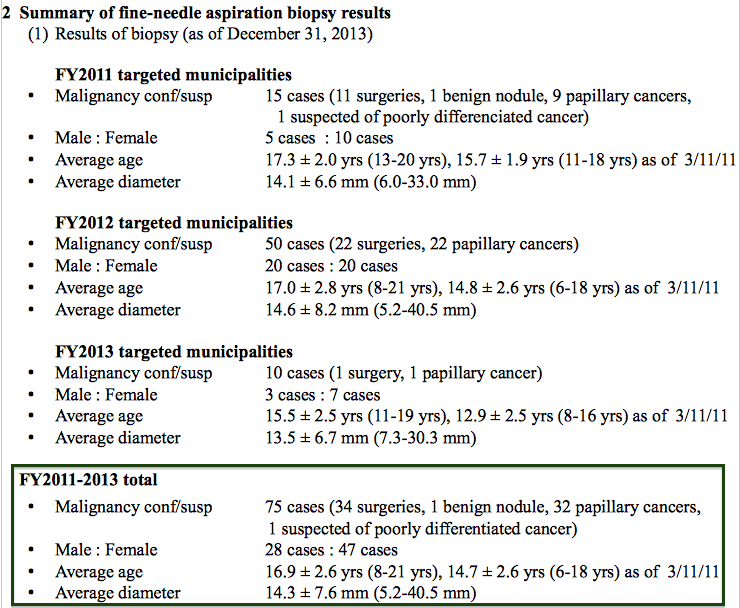 In summary, there were 7 more cancer cases confirmed since the last report on November 12, 2013. One case was confirmed in a female from Namie Town, 5 in Koriyama City, and 1 in Izumizaki Village.

Shinichi Suzuki, a Fukushima Medical University physician in charge of the thyroid ultrasound examination, cautioned against jumping to the conclusion about this "poorly differentiated cancer" which normally is associated with a poor prognosis. Although he did not elaborate on details, he said the diagnostic criteria for poorly differentiated thyroid cancer have recently changed. This was the case which, initially thought of as papillary thyroid cancer, was undergoing cytological reevaluation by pathologists who are still not sure about the exact subtype.

Interestingly, the first thing Suzuki mentioned, when it was his turn to present the thyroid examination results at the committee meeting, was the news post published today in multiple newspapers regarding the Fukushima Medical University beginning a genetic analysis of the cancer tissues. The news post states that Fukushima Medical University will use the thyroid cancer tissues, excised during surgeries, to analyze for genetic alterations to help figure out why the cancer originated. What was odd was that Suzuki, as if avoiding a swarm of questions, offered an explanation that such genetic analyses are routinely performed on adult cancer specimen using the special research money and approved by the University's ethics committee. He emphasized that the genetic analysis was totally separate from the thyroid ultrasound examination. He asked for an understanding as he felt it was the mission of Fukushima Medical University to conduct the genetic analysis in order to watch over the children's future.

As for the perceived "slow" speed of confirming the cancer cases, Suzuki said that some of the cases suspected of cancer did not warrant immediate surgeries, allowing for the children to live their lives with close monitoring.

As usual, no information was offered such as the type of nodules and also details of each surgical case which, as part of regular medical care, are considered beyond the scope of the screening and thus inaccessible to the Health Management Survey team.

*****
Below is a reference table showing the 2008 thyroid cancer incidence rate per 100,000 in Japan, compiled from the National Cancer Center (2012) Cancer incidence from cancer registries in Japan (1975–2007) on the website of Center for Cancer Control and Information Services, National Cancer Center, Japan. Due to an intense interest, domestically and internationally, in the pediatric thyroid cancer occurrence in Japan, the tables focused on the relevant age groups.


This shows “incidence,” representing the rate of occurrence of new cases in a given period. On the other hand, Fukushima thyroid examination is mass screening, which yields “prevalence,” the proportion of the total number of cases to the total population.


It is important to note that incidence and prevalence are not directly comparable, so the incidence rates shown above are only a relative measure of comparison.