Fukushima Thyroid Examination, February 2015: 117 Potential Thyroid Cancer Cases, 87 Confirmed and 30 Awaiting Surgery--109 from 1st Round and 8 from 2nd Round Screening

The Eighteenth Prefectural Oversight Committee for Fukushima Health Management Survey convened in Fukushima City, Fukushima Prefecture, on February 12, 2015, releasing the latest results of thyroid examination, consisting of Initial Screening or the first round screening (originally scheduled to be conducted from October 2011 to March 2014, but actually still ongoing) and Full-Scale Screening or the second round screening (beginning April 2014).

An official English translation of the results is now available here.

It has only been 7 weeks since the normally quarterly Oversight Committee last met on December 25, 2014. The latest results include two more months worth of results confirmed as of December 31, 2014.

Initial Screening (the first round) targeted about 368,000 individuals who were age 18 and younger, residing in Fukushima Prefecture at the time of the Tokyo Electric Fukushima Daiichi nuclear power plant accident on March 11, 2011.

Full-Scale Screening (the second round), to be conducted every 2 years until age 20 and every 5 years after age 20, additionally targets those who were born in the first year after the accident, aiming to examine approximately 385,000 individuals in a 2-year period.

Curiously, officials are still accepting first-time subjects in the first round screening in an attempt to raise the participation rate, allowing those who haven't yet undergone Initial Screening to participate in it so as long as they have not received a notice for Full-Scale Screening. As a result, 81.2% of those eligible have now undergone the primary ultrasound examination, either in Fukushima Prefecture or in other prefectures where they have relocated to. This is 0.5% more than the results released on December 25, 2014.

The second round has so far covered nearly half of about 220,000 residents from 25 municipalities targeted for examination in Fiscal Year 2014, ending on March 31, 2015. 75,311 had confirmed results as of December 31, 2014: 31,789 (42.2%)  with A1 test results, 42,911 (57.0%) with A2, and 611 (0.8%) with B. As of December 31, 2014,168 were newly categorized as B, 129 more underwent secondary examination, 107 more had confirmed results and 11 more underwent fine-needle aspiration cytology and 4 were found to be suspicious of malignancy: 1 male (age 13 at the time of the accident) and 3 females (age 10, 13 and 13 at the time of the accident). Their first-round test results were either A1 (2 cases) or A2 (2 cases) . The four are from three FY 2011 municipalities--Namie Town, Date City and Tamura City, and Fukushima City which was a FY 2012 municipality. So far a total of 8 cases, including the newly diagnosed 4, are found to be suspicious of malignancy from the second round. One suspect case announced in the last Committee meeting has been confirmed of papillary thyroid cancer after post-surgical tissue diagnosis.

The second round appears to have a higher percentage of A2 at 57.0% than the first-round at 47.7%, but nearly all of them appear to be cysts. The second round also has a lower percentage of A1 at 42.2%, as opposed to the first-round at 51.5%. These trends appear to be seen across all age groups. On the other hand, the proportion of B is fairly consistent across the board at 0.8% .

The proportion of those who underwent FNAC has significantly decreased in each successive year: 64.5% in FY 2011, 43.7% in FY 2012, 28.9% in FY 2013, and 13.1% in FY 2014. Shinichi Suzuki, a Fukushima Medical University professor and the head of thyroid examination program, explained that the FNAC rate was high in FY 2011 as they were being overcautious. He assured that the diagnostic guidelines were established to avoid overdiagnosis, and those guidelines remained the same since thyroid examination was launched, but some of the first cases asked for FNAC just to be certain there was no cancer and they were not turned down. In the second round, there are simply fewer cases that meet criteria for FNAC.

There was a leak of information the day before the Committee met, pertaining to the confirmed cancer case from the second-round. Committee chair and vice-chair both expressed their displeasure and disappointment, asking the media to be respectful so that information won't be misunderstood. They also stated that knowing an insider leaked information created an uncomfortable work environment. They repeatedly asked the media to wait until after the Committee presented the information in context. A member of the media who published leaked news articles in the past claimed freedom for the press to publish as it wishes.

A summary of results are provided for Initial Screening and Full-Scale Screening.

Overall, the number of suspicious or confirmed of malignancy is 118, including a case of post-surgically diagnosed benign nodule. (This number might be referred to as 117, excluding the benign nodule case). Of these, 87 are surgically confirmed as thyroid cancer (84 papillary thyroid cancer and 3 poorly differentiated cancer) and 30 are suspicious of malignancy awaiting surgery, including 1 new case from the first-round and 4 new cases from the second-round.

In regards to detailed characteristics of some of the malignant cases, such as metastases, staging, surgical methods, and genetic analysis, refer to this post describing information gathered from various sources. (Such information is not readily provided, as biopsy as well as surgical cases are technically no longer part of the screening and personal data is guarded, almost over-rigorously). Suzuki declined to reveal the proportion of cases with lymph node metastasis during the press conference, citing privacy concern due to surgery being part of regular medical care. Nevertheless, he did say that it was about the same as previously released at the November 11, 2014 Thyroid Examination Evaluation Subcommittee, which was 74%.

*****
Below are translations of some of the tables in the results.

Table 2. Number and proportion of participants with nodules/cysts as of December 31, 2014

Table 3. Secondary examination: progress and results as of December 31, 2014 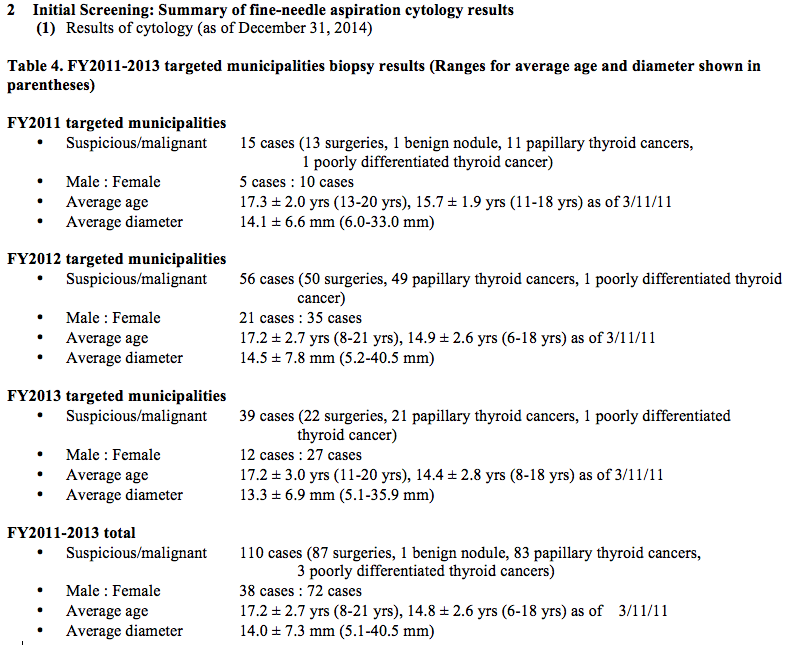 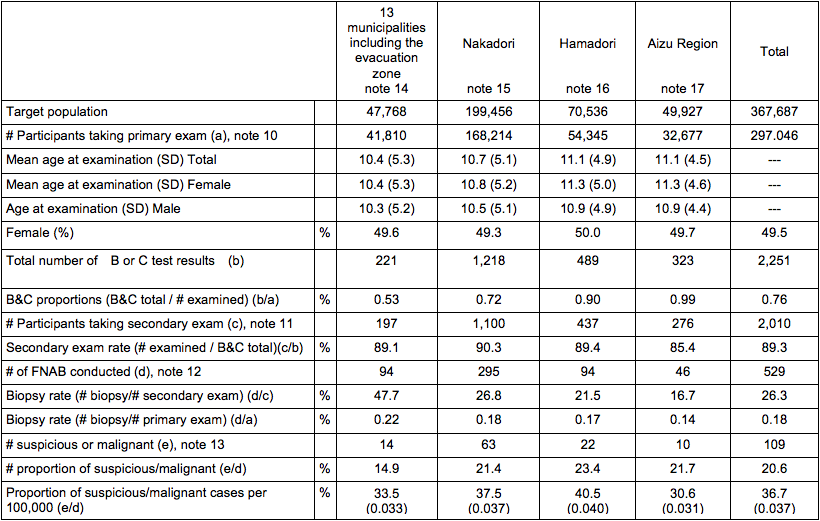 Table 2. Number and proportion of participants with nodules/cysts as of December 31, 2014 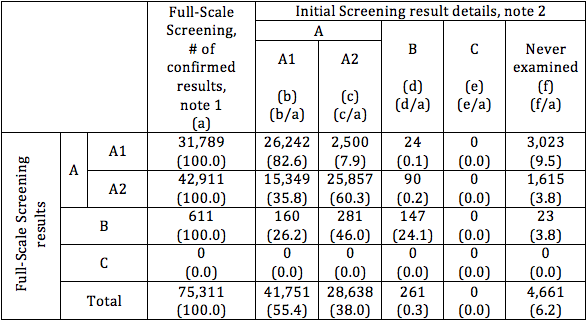 Table 4. Secondary examination progress and results as of December 31, 2014