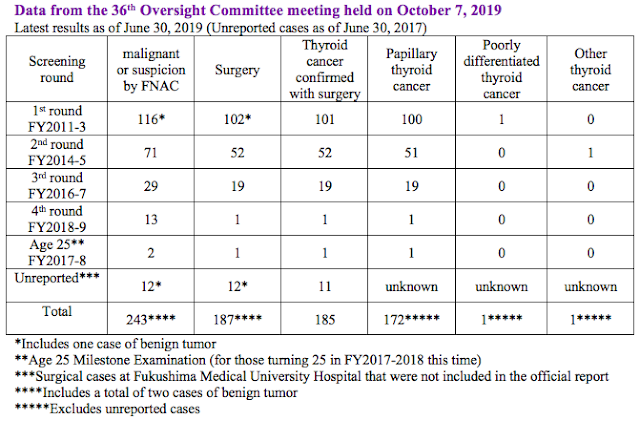 (See this post for details of the "unreported" cases.)

Overview
On October 7, 2019, the 36th session of the Oversight Committee for the Fukushima Health Management Survey (FHMS) convened in Fukushima City, Fukushima Prefecture. This was the first session of the 5th term, and the agenda centered on the Thyroid Ultrasound Examination (TUE) in order to familiarize the new members with the scheme and current status of the TUE. The Interim Summary for the second-round results was presented along with a summary of discussion from the 35th session.
The latest results of the third and fourth rounds of the Thyroid Ultrasound Examination (TUE) (as of June 30, 2019) were also released. Official English translation, ordinarily available on the website of Office for International Cooperation at the Radiation Medical Science Center for the Fukushima Health Management Survey, has not been released since the 33rd session on December 27, 2018. According to the most recent entry in Announcements, this translation was posted online on April 5, 2019, over 3 months after the 33rd session was held. This is a lot longer than the previous turnaround time of 3-4 weeks up to the 31st session. Now that the official translation is 3 sessions behind, it remains to be seen whether FMU is even going to continue to provide it.

Summary on the current status of the TUE
A six-page summary of the first through fourth rounds as well as the Age 25 Milestone Screening, "The Status of the Thyroid Ultrasound Examination," lists key findings from the primary and confirmatory examinations as well as the surgical information. This summary is not translated into English officially, but here's an unofficial translation which hopefully helps make up for the unavailability of the entire results in English.

#36 Status of the Thyroid Ultrasound Examination (October 7, 2019) by Yuri Hiranuma on Scribd

Key points from the Oversight Committee

New and returning member list
The 2019-2021 term (the fifth term) of the Oversight Committee consists of 18 members including 6 new faces, with an addition of one more member than the previous term. The new roster is available here (only in Japanese).
No immediate plan has been announced to convene the third term of the Thyroid Examination Evaluation Subcommittee whose purpose to analyze the third-round results. But the new roster has already been released.

Notably, Toru Takano of Osaka University, a controversial figure who held dual positions in the Oversight Committee and the Thyroid Examination Evaluation Subcommittee during the last term, is out the door.

＊＊＊ Special note ＊＊＊
Hideo Tatsuzaki warrants a special mention. He occupies the 18th position on the roster which was newly added this term. An addition of this position was never brought up or discussed publicly during the last term and appears to be at the discretion of an unknown party, perhaps the prefectural government. In view of the fact that his immediate superior at QST is Shunichi Yamashita, who is Director General at the Center for Advanced Radiation Emergency Medicine, Tatsuzaki could effectively be considered Yamashita's surrogate.
A Tokyo Shimbun article published in the morning edition on January 28, 2019 states that Tatsuzaki was a leader of the medical team at the Offsite Center, an emergency response measures base facility established in Fukushima Prefecture during the immediate post-accidental period.
Also, according to the self-declaration form submitted to the Technical Committee on Nuclear Power Safety Management in Niigata Prefecture, Tatsuzaki was affiliated as a radiation oncologist with IAEA from 1997 to 2001 as First Officer in the section of Applied Radiation Biology and Radiotherapy, Department of Human Health, IAEA. Tatsuzaki was also a member of the Ministry of Foreign Affairs domestic committee for IAEA/RCA lead country in the field of health and medicine in FY2018-2019. (RCA stands for Regional Cooperative Agreement for Research, Development and Training Related to Nuclear Science and Technology for Asia and the Pacific.)
His ties with Yamashita and IAEA could put Tatsuzaki in a position to ascertain "dismissal" of any radiation effects potentially observable in the third and fourth rounds, complementing FMU's ongoing efforts to withhold data needed for meaningful and transparent analysis.

The third round
The third-round results between April 1, 2019 and June 30, 2019 show that the primary examination participation rate remained at 64.7% with an additional 177 undergoing the examination. Nine more participants, assessed "B," became eligible for the confirmatory examination.
Nine participants (not necessarily the same nine previously mentioned) underwent the confirmatory examination and five that newly underwent FNAC were all diagnosed with suspected thyroid cancer. This makes "29" the total number of suspected thyroid cancer cases in the third round.
The 5 new suspected thyroid cancer cases consist of 3 males (ages-at-exposure: 6, 6, and 8) and 2 females (ages-at-exposure: 10 and 11), with 2 from Hamadori and 3 from Aizu. The second-round results for these five cases were 1 case with A1, 2 cases with A2 cyst, and 2 cases with B, meaning 3 of 5 had no previous sign of cancerous lesion 2 years ago.
There was only one new surgical case from the third round, with the total of 19 surgically confirmed thyroid cancer cases. Because the Japanese summer break for elementary through high schools is usually from late July through August (longer for colleges), the next set of data as of September 30, 2019 (to be released in late December) is likely to include more cytology and surgery results.

The fourth round
The fourth round, scheduled from April 1, 2018 through March 31, 2020, is actively ongoing. The current participation rate for the primary examination of 40.1%, lower than the previous rounds (81.7% for the first round, 71.0% for the second round, and 64.7% for the third round), is expected to increase especially with the progress of the school examination in the FY 2019 municipalities. Nonetheless, just how high it will get remains to be seen.
Eighty-one participants newly underwent the confirmatory examination which raised a participation rate to 59.8%. Twelve participants, all from the FY2018 municipalities, newly underwent FNAC, and 8 of them were diagnosed with suspected thyroid cancer, making "13" the total number of suspected thyroid cancer cases in the fourth round.
The 8 suspected thyroid cancer cases are all from Nakadori, consisting of 4 males and 4 females. Because this is the first time that the age and sex distribution graph for the fourth round was released, it is not possible to specify ages-at-exposure for the 8 new suspected thyroid cancer cases. However, it is possible to identify age and sex for the entire 13 suspected cancer cases in the fourth round which include 6 males (ages-at-exposure: 5, 5, 7, 7, 12, and 12) and 7 females (ages-at-exposure: 4, 6, 8, 9, 10, 10, and 10).
As can be seen, there are more patients who were aged 5 years or younger at exposure. There might be more thyroid cancer cases detected in those who were aged 5 years or younger from now on, but declining participation rates with successive screening rounds are likely to dampen the reliability of the data. Moreover, once patients are placed on the clinical follow-up track, which can happen when potential thyroid cancer risk is identified but no immediate diagnosis is made for various reasons directly during the confirmatory examination, they essentially disappear into a "black box": any cancer cases diagnosed in the black box become "unreported cases" which are not included in the official tally. Although some of the "unreported" cases have been revealed as described in this post, publicly available data is far from a true and complete picture of the situation.
In addition, there is no way to identify which cancer occurred as a result of radiation exposure, but their previous results from the earlier rounds might give some hint. The third-round results for the 8 newly diagnosed suspected cases were 2 cases with A1, 2 cases with A2 cyst, 2 cases with A2 nodule, and 2 cases with B. However, their results in the first and second rounds are not publicly available. (No doubt that FMU has such information.)
There was no new surgical case for the fourth round at this time. As mentioned in the previous section, the next set of data as of September 30, 2019, to be released in late December, will probably include more surgeries because the patients might defer surgery until the summer break so as not to interfere with school work.

Results from the previous screening
Below is information on previous assessments of the suspected/confirmed thyroid cancer cases. In the second round, 33 of 71 cases were assessed as "A1" meaning there were no ultrasound findings. Thirty-two were assessed as "A2" with ultrasound findings of nodules ≤ 5.0 mm and/or cysts ≤ 20.0 mm, 5 were assessed as "B" with nodules ≥ 5.1 mm and/or cysts ≥ 20.1 mm. Of 32 cases with A2, 25 cases had cysts. Having previous assessments of "A1" or "A2 cysts" means there was no precancerous lesion during the prior TUE, i.e., cancer supposedly appeared since the prior TUE. (Note: FMU claims the cancerous lesions were simply "invisible" during the prior TUE.)