The first round of thyroid examination concluded in March 2014, and its results are nearly complete, except for some of the secondary examination results which were still not available as of August 24, 2014. Fukushima Medical University denies any regional difference in the incidence of thyroid cancer amongst Fukushima children and considers it unlikely that the current incidence of cancer is related to radiation exposure.  Although it might not be possible to epidemiologically assess the radiation health effects until the second round of thyroid examination is finished at the end of March 2016, the currently available data could still be analyzed in more detail.

As the nature of Japanese language allows significant amounts of information to be shared in a tweet using 140 letters, there has been an active discussion going on regarding the thyroid examination results on Twitter. When the results are released by Fukushima Medical University, citizen scientists--some professionals and some concerned citizens--would closely examine and analyze them.

Some say it is all due to the screening effect, having nothing to do with radiation exposure, and they claim the thyroid examination is causing more harm by unearthing cancer that might have laid dormant until much later in life. Some go to the other extreme to claim all the cancer cases could be due to radiation exposure. And there are those who are somewhere in-between, calling for a careful data collection and analysis so as not to miss any cases which might potentially be related to radiation exposure.

Two of the Twitter users actively involved in the discussion, @pririn and @iPatrioticmom, analyzed the latest Fukushima thyroid ultrasound examination results, released n August 24, 2014. Rather than claiming definite radiation health effects, which at this point is difficult to do, they simply want to point out the need for proper analyses of data from the first round of examination. They admit that this analysis is not by any means a final one and that the data is not age adjusted.

Original analysis in an Excel file: Japanese and English.

Based on Table 8 of "Thyroid Examination (Initial Screening)" provisional results


■ Incidence rate in adjacent municipalities, grouped together so each group consists of about 10,000 to 20,000 primary examination participants (age group is not controlled)

(Groups are shown in gradations of the color--blue, yellow, or green--assigned to each fiscal year's target municipalities in the table above). 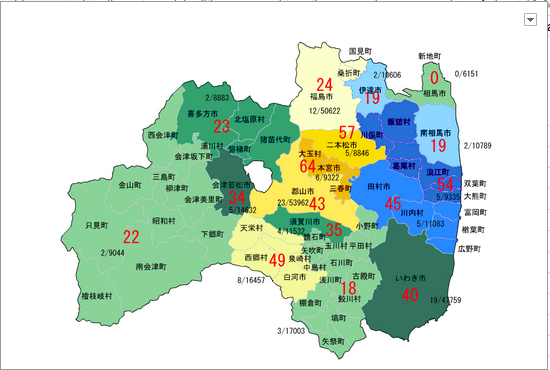 ■ Regional differences--up to 5 times between the FY2012 and FY2013 target municipality groups as shown below: 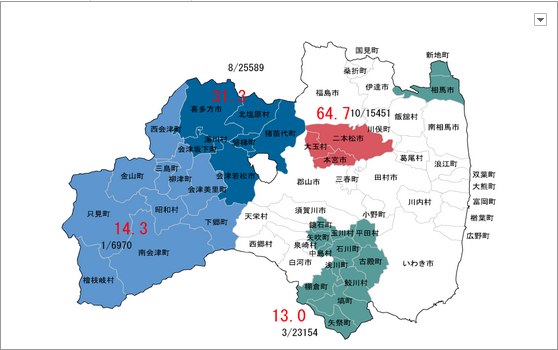 Shown below is the same table as above, except with each fiscal year's target municipalities color-coded according to the map immediately below. Names of the municipalities are shown in English and numbers are assigned corresponding to the numbers shown in the leftmost column. 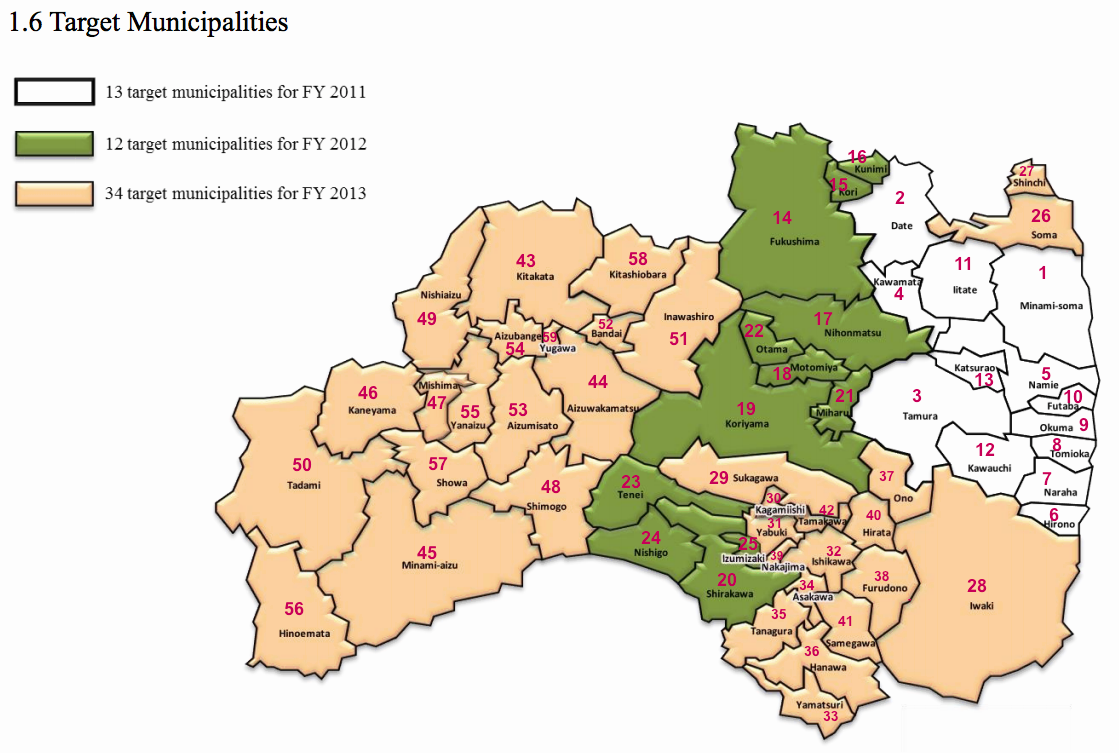 ■ Incidence rate of each municipality and plume flow on March 15, 2011 analyzed by JAEA

Incidence rate per 100,000 (in red) in municipalities with more than 1,000 primary examination participants, superimposed on maps showing contaminated regions due to the March 15-16 radioactive plume, analyzed by JAEA

Sources:
① Table 8 of "Thyroid Examination (Initial Screening) provisional results"
② "Formation of contaminated areas from the morning of March 15 to the afternoon of March 16" on page 16 of "Diffusion of Radioactive Iodine in the Environment: Based on the Model Calculation Results" by Masamichi Kayano, JAEA" 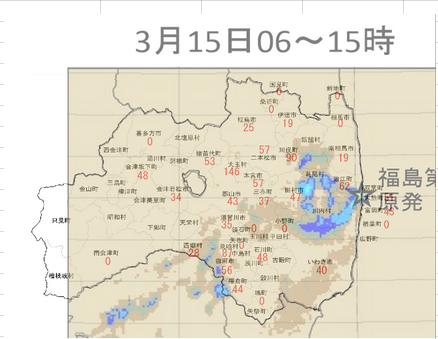 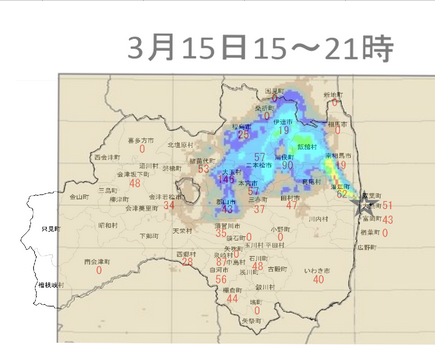 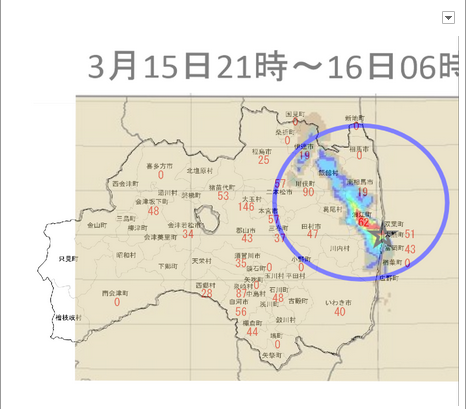 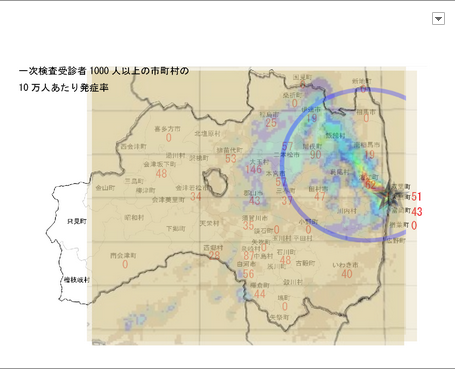 ■ Incidence rate of each municipality and soil contamination

Incidence rate per 100,000 (in red) in municipalities with more than 1,000 primary examination participants, superimposed on a map of radioactive cesium concentration in agricultural land

Source: The Ministry of Health, Labour and Welfare document, based on the radionuclide concentration distribution map in the agricultural land by the Ministry of Agriculture, Forestry and Fisheries (in Japanese) 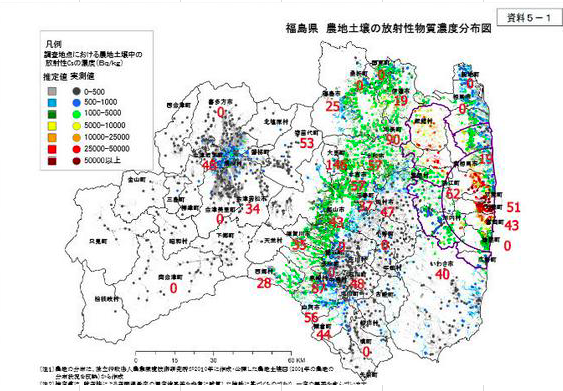 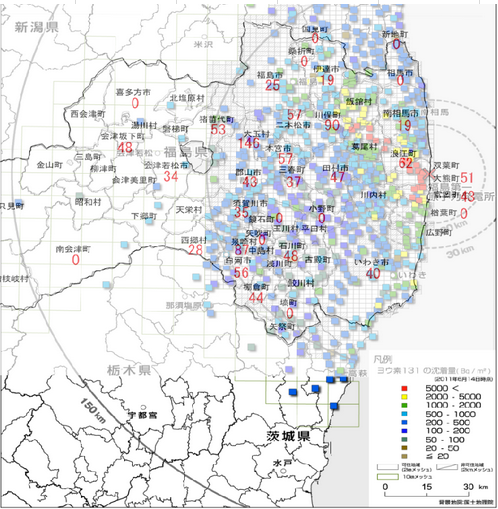