Fukushima Thyroid Examination May 2015: 103 Thyroid Cancer Cases Confirmed, 5 in the Second Round Screening

The Nineteenth Prefectural Oversight Committee for Fukushima Health Management Survey convened in Fukushima City, Fukushima Prefecture, on May 18, 2015, releasing the latest results of thyroid examination, consisting of Initial Screening or the first round screening (originally scheduled to be conducted from October 2011 to March 2014, but actually still ongoing) and Full-Scale Screening or the second round screening (beginning April 2014). It has been 3 months since the last committee meeting on February 12, 2015, and the latest results include 3 more months worth of data confirmed as of March 31, 2015.

An official English translation of the results is now available here.

Initial Screening (the first round screening) targeted about 368,000 individuals who were age 18 and younger, residing in Fukushima Prefecture at the time of the Tokyo Electric Fukushima Daiichi nuclear power plant accident on March 11, 2011.

Full-Scale Screening (the second round screening), to be conducted every 2 years until age 20 and every 5 years after age 20, additionally targets those who were born in the first year after the accident, aiming to examine approximately 385,000 individuals in a 2-year period.

Officials are still accepting first-time subjects in the first round screening in an attempt to raise the participation rate, allowing those who haven't yet undergone Initial Screening to participate in it so long as they have not received a notification letter for Full-Scale Screening. As a result, 966 more, or 81.5% of the eligible underwent the primary ultrasound examination, either in Fukushima Prefecture or in other prefectures where they have relocated to. This is 0.3% more than the results released on February 12, 2015, and gave rise to the 2 newly suspicious cases. Although no individual information was released, a comparison of the latest results to the previous results from February 2015 reveals that they are both women, one from Iwaki City and the other from Aizu Wakamatsu City, whose ages were 11 and 18 at the time of the accident, and at least one of the two had a tumor diameter of 45.0 mm.

Again the details of the additional 7 cases newly determined to be suspicious/malignant after biopsy are not specified in detail, but comparison with the previous results reveals they include 2 males (ages 12 and 14 at the time of the accident) and 5 females (ages 8, 14, 17, 17 and 18 at the time of the accident). The average tumor diameter for the suspicious/confirmed cases in the second-round decreased slightly from 10.2 mm to 9.1 mm with the maximum diameter remaining the same, suggesting most newly diagnosed cases had tumor diameters on the smaller end. Their first round screening results include 3 cases each of A1 and A2, and a case of B. The places of their residence at the time of the accident include the FY 2011 target municipalities of Minamisoma City and Date City and the FY 2012 target municipalities of Fukushima City (4 cases) and Nihonmatsu City. According to the previous results (Jan 2012,  May 2012), most of the Minamisoma City residents had Initial Screening by the end of December 2011, and the Date City residents were screened in Jan-March 2012, whereas Initial Screening began in May 2012 in Fukushima City and in September 2012 in Nihonmatsu City. Although biopsy results were confirmed in these 7 cases sometime between January and March 2015, it is not clear exactly when they underwent the primary examination of the Full-Scale Screening which began in April 2014. Given the limited amount of information, it is not possible to identify where the previously A1 cases lived, who apparently had no ultrasound findings in Initial Screening. It means they likely developed the tumor in a little over 2 years since the last screening, and about 3 years after the accident.

The Interim Summary of the Thyroid Examination Evaluation Subcommittee meeting, held on March 24, 2015, was reviewed during this committee meeting, as the Subcommittee meeting apparently wrapped up its session as of the March meeting at the end of FY 2014*. The Subcommittee came to a conclusion that the current situation where 99 of 112 suspicious/malignant cases had surgeries and 98 were confirmed with thyroid cancer (95 papillary thyroid cancer and 3 poorly differentiated cancer) clearly represents an excess incidence of pediatric thyroid cancer increased over the Japanese prevalence rate by an order of magnitude (At the November 11, 2014 subcommittee meeting, it was described as "61 times"). Amongst several issues addressed, the interim summary states that this increase can be a result of either excess occurrence due to radiation exposure or over-diagnosis, and that there were opinions amongst the subcommittee members that the current scientific knowledge does not completely deny the former, yet the latter was more likely. It goes on to state, "At the current time, it is not possible to conclude if thyroid cancer cases detected during the screening are radiation-induced. The results of the Initial Screening suggest that it is unlikely these cases are the effect of radiation exposure, considering that the exposure dose is far less than the Chernobyl accident and that there have been no cancer cases in children younger than 5 at the time of the accident. However, a long-term, ongoing study is needed in order to evaluate the effect of radiation exposure. Moreover, the early internal exposure dose from radioactive iodine is extremely critical in assessing the effect of the accident. The screening should continue in conjunction with the dose estimation study. "

Meanwhile, attendees and webcast viewers were surprised to find out that Shinichi Suzuki, a Fukushima Medical University thyroid surgeon who was in charge of the Fukushima Thyroid Examination was replaced with Akira Otsuru, an internist and a professor in the Department of Radiation Health Management at Fukushima Medical University. Otsuru, formerly of Nagasaki University, was one of the first to go to Fukushima Prefecture immediately after the accident as a head of the radiation medicine team sent from Nagasaki University. Otsuru was clearly not knowledgeable about surgical details of the cases as Suzuki was, although a lot of details were not released by Suzuki citing patient confidentiality anyway. During the committee meeting as well as the press conference afterwards, Otsuru often did not seem to comprehend questions from other committee members or journalists. There was already an issue of data management and transparency with Suzuki withholding some data from the committee, prioritizing presentations at academic meetings. With the assignment of Otsuru and absence of Suzuki at the committee, there appeared to be a setback of information disclosure and transparency.

A summary of results are provided below for Initial Screening and Full-Scale Screening, followed by unofficial translation of selective tables from the results. All numbers shown below are from the data analysis as of March 31, 2015.

Table 2. Number and proportion of children with nodules/cysts as of March 31, 2015

Table 3. Confirmatory examination coverage and results as of March 31, 2015 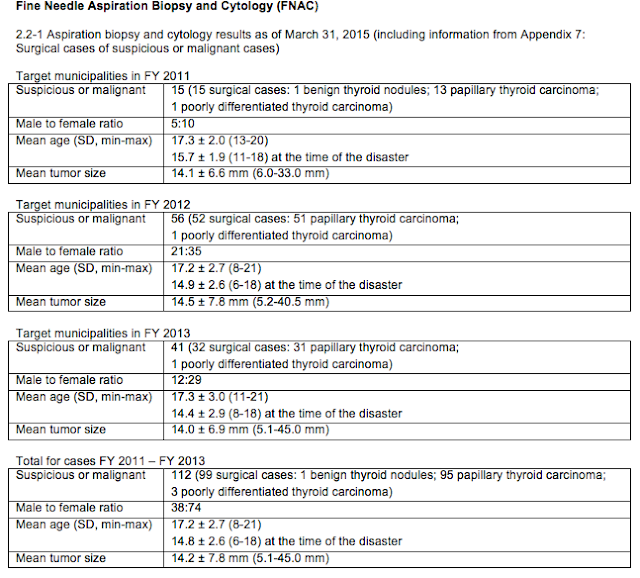 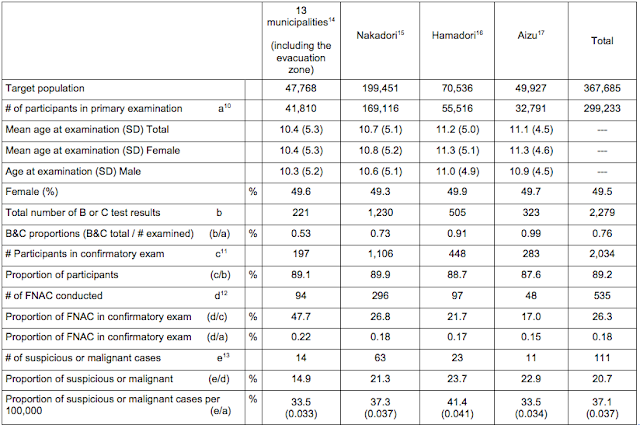 Table 2. Number and proportion of children with nodules/cysts as of March 31, 2015

Table 3. Changes in the results of Initial Screening and Full-Scale Screening as of March 31, 2015

Table 4. Confirmatory examination coverage and results as of March 31, 2015

*Japanese governmental committees run on fiscal year schedules--April to March of the following year--and seem to be required to produce some sort of report, often called an "interim summary," which are essentially the final report. Although it wasn't clearly announced, it seemed to be understood during the March session that the Subcommittee would not meet again and the interim summary would be forwarded to the next session of its parent committee, the Prefectural Oversight Committee for Fukushima Health Management Survey).