Asahi Shimbun GLOBE: The Japanese Government Demanded Revisions of the 2012 WHO Report on Fukushima Radiation Exposure


The December 7, 2014 issue of the Asahi Shimbun GLOBE, a for-fee division of the Asahi Shimbun website, featured a series of articles on World Health Organization (WHO). It included an article whose title translates into "Revision Demanded of the Fukushima Radiation Exposure Report."

A screenshot of the article: 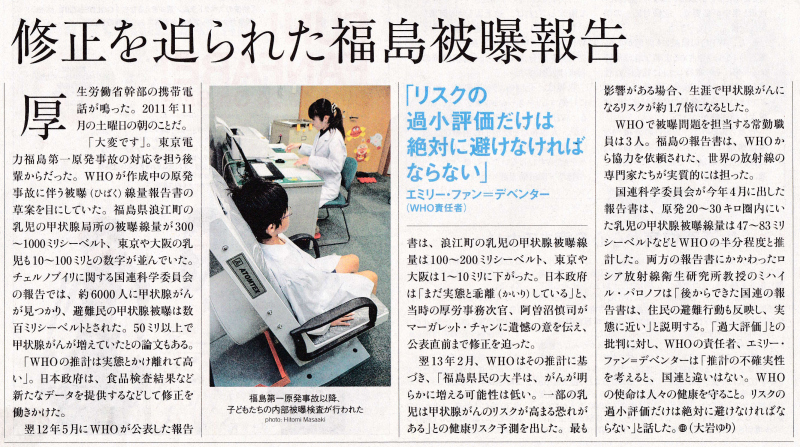 (Not to be copied without permission from Asahi Shimbun).


Below is an unofficial English translation of the article, with the contextually clarified title, posted with permission from the Asahi Shimbun. This post will be no longer available after April 29, 2016 (Japan time).*

A high level Ministry of Health, Welfare and Labour (MHWL) official heard the cell phone ring. It was a Saturday morning in November 2011. “We have a problem.” It was from a younger colleague who was looking right at a draft copy of the dose estimation report due to the nuclear accident that WHO had been working on.

“WHO’s estimate is substantially higher than the reality.” The Japanese government worked at having WHO revise the estimates by offering new data such as the food monitoring results.

In the WHO dose estimation report released in May 2012, thyroid exposure doses for infants was lowered to 100 to 200 mSv for Namie Town and 1 to 10 mSv for Tokyo and Osaka. As it was felt that this was still dissociated from the reality, the Japanese government requested revisions until moments before the release of the report, with then MHLW Vice Minister Shinji Asonuma conveying disappointment to Margaret Chan.

In February 2013, WHO released a health risk prediction based on these estimates, “In majority of Fukushima residents, a possibility for an obvious increase in cancer is low. Thyroid cancer risk might be increased in some infants.” Lifetime risk for thyroid cancer would be about 1.7 times higher at maximum.

There are 3 full-time employees at WHO in charge of radiation exposure issues. The WHO Fukushima reports were essentially written by an international group of radiation specialists at the request of WHO.

The UNSCEAR report released in April 2014 estimated thyroid exposure dose of 47 to 83 mSv, about half of the WHO estimates, for infants who were in the 20-30 km zone from Fukushima Daiichi NPP. Mikhail Balonov, a professor at the Institute of Radiation Hygiene in Russia and involved with both reports, explained, “UNSCEAR report created after the WHO reports is more realistic, as it reflects evacuation movements of the residents.” As for the criticism that the WHO reports are overestimation, the WHO manager in charge of the reports, Emilie van Deventer, said, “Considering uncertainties of estimation, it is not much different from the UNSCEAR report. The mission of WHO is to protect people’s health. Underestimation of risks must be avoided at any cost.”

*Asahi Shimbun charged an annual fee of 12,000 yen plus tax for the secondary use (as in my own translation) of the article in the web. With an 8% sales tax of 960 yen and a domestic bank transfer fee of 324 yen, the total came to 13,284 yen (or $111.75 at today's exchange rate). According to the rules set by the Asahi Shimbun, excerpting did not require permission, but it necessitated a longer article to insert only parts of the translation. In order to avoid selection bias, a decision was made to personally pay the fee for one year so the information can be shared in its entirety, free of any personal biases.

Copying the translation for reposting is permitted only if the entire translation is copied so as not to create any misunderstanding. This does not include the screenshot of the original article shown above, which requires permission from Asahi Shimbun. 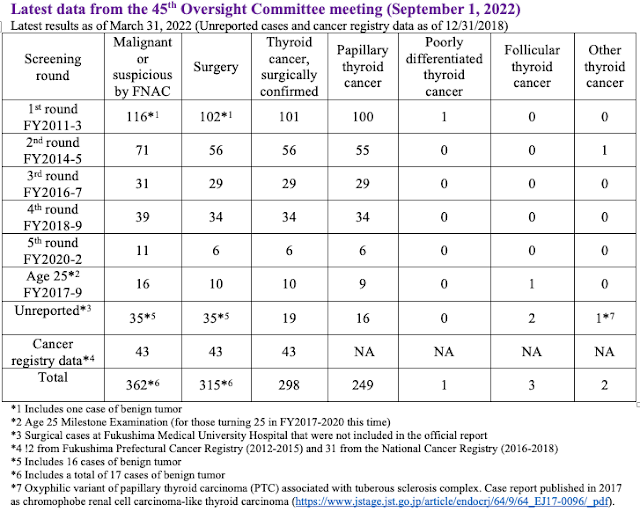