On the first day of the 52nd Annual Meeting of Japan Society of Clinical Oncology which is being held on August 28 - 30 in Yokohama City, Japan, Shinichi Suzuki, a thyroid surgeon from Fukushima Medical University in charge of the Fukushima thyroid ultrasound examination, presented some details of the surgical cases in a presentation titled "Treatment of childhood thyroid cancer in Fukushima" during the Organ Specific Symposium 03: Up-to-Date Thyroid Cancer Treatment - Thyroid Cancer in Children and Adolescents. Suzuki has consistently declined to reveal these details during sessions of the Prefectural Oversight Committee Meeting for Fukushima Health (Management) Survey as well as the Fukushima Thyroid Examination Expert Subcommittee meetings. 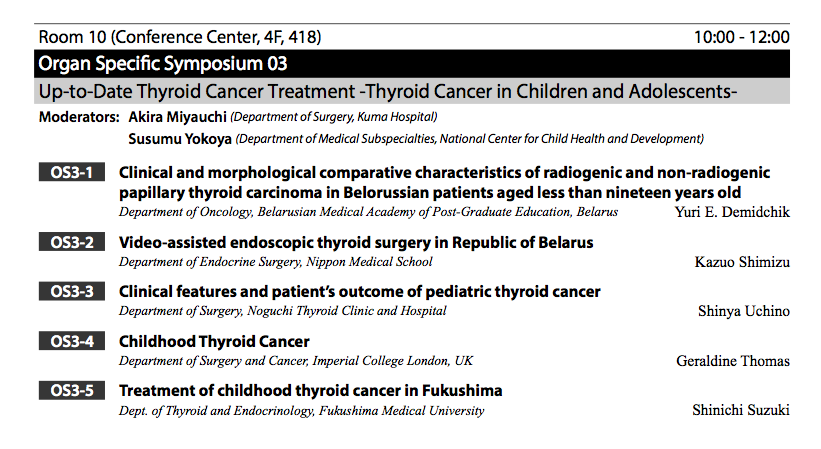 From the news report, which is the only material available online containing information revealed by Suzuki, Fukushima Medical University operated on 54 of the 57 surgical cases, with 45 meeting the criteria for absolute surgical indications described at the August 24 Oversight Committee Meeting for Fukushima Health Survey, excerpted below:

According to Suzuki, 45 cases had a tumor diameter over 10 mm or metastases to lymph nodes or other organs, with 2 having lung metastases. From the news report, it is unclear how many of the 45 had lymph node metastases. Also, the latest thyroid examination results revealed two confirmed cases of poorly differentiated cancer, and it is unclear if these two cases were the cases with lung metastases. Of the other 9 cases, 7 were in close proximity to the trachea, again meeting the surgical indications. 2 cases turned out to be precautionary surgeries based on the wishes of the patient and/or family. As about 90 % of the surgical cases had hemithyroidectomy, meaning a surgical removal of one lobe of the thyroid gland, most of the patients have some thyroid function preserved, although the risk of recurrence still exists.

In regards to the timing and place of Suzuki's report, although it would seem more appropriate for him to present the details at the Prefectural Oversight Committee Meeting for Fukushima Health Survey, the following fact must be addressed: The cases which advance beyond a certain point of the secondary examination, such as biopsy, are no longer part of the Fukushima thyroid ultrasound examination as screening but rather go under regular medical care. Therefore it appears legitimate that Suzuki presented them at an academic conference first.

By the way, those over age 18 no longer qualify for free medical care for Fukushima children. As 57 of the 104 confirmed or suspected of cancer were over age 18, more than half of them are facing a financial burden (Japan's National Health Insurance requires 30% copay) in addition to a physical and psychological burden of having cancer, as the treatments and follow-ups are conducted as part of regular medical care.

Incidentally, President of the 52nd Annual Meeting of Japan Society of Clinical Oncology, Seiichi Takenoshita, is Professor and Chairman of the Department of Organ Regulatory Surgery, Fukushima Medical University. In other words, he is Suzuki's boss.

Suzuki is scheduled to speak again during the August 30 Fukushima Session called “Message from Fukushima,” featuring Shunichi Yamashita as a keynote speaker. Yamashita will speak on "Scope for the future of Fukushima; resilience creation after the nuclear accident." Suzuki's presentation is called "Radiation exposure and thyroid ultrasound examination from the data of the Fukushima Health Management Survey."

Below is a complete translation of the Nikkei article, originally by Kyodo, posted online at 10:05 pm on August 28, 2014.

Children with Thyroid Cancer “Unlikely To Be the Effect of the Nuclear Accident,” Fukushima Examination Reported at an Academic Meeting

On August 28th, Professor Shinichi Suzuki from Fukushima Medical University reported details about surgical cases of children who were diagnosed to have strong suspicion of cancer at the Japan Society of Clinical Oncology meeting held in Yokohama City. These children were diagnosed during the thyroid examination conducted by Fukushima Prefecture because of the Tokyo Electric Fukushima Daiichi nuclear power plant accident.

After presenting his viewpoint that cancer cases were unlikely to be the effect of the nuclear accident, Suzuki referred to some opinions about possibilities of overdiagnoses and unnecessary surgeries. He emphasized that “treatment was based on the [diagnostic] criteria.”

Fukushima Prefecture’s thyroid examination targets approximately 370,000 residents who were younger than 18 at the time of the disaster/accident. So far 57 children have been confirmed to have cancer, and 46 are “suspected of cancer.” Comparing to the 1986 Chernobyl nuclear power plant accident which saw a skyrocketed increase in pediatric thyroid cancer, Suzuki stated, “[Fukushima is] different from Chernobyl in terms of symptoms and age distribution.”

Regarding the 54 cases, out of 57 cancer cases, operated on at Fukushima Medical University, 45 cases, or a little over 80%, exhibited tumor diameter over 10 mm or metastases to lymph nodes or other organs, meeting the diagnostic criteria for surgery. Two cases had lung metastases.

Remaining 9 cases had tumor diameter equal to or less than 10 mm and had no metastases, but in 7 of them, “Surgery was appropriate as the tumor was in close contact with the trachea.” Close observation and follow-up was deemed appropriate for [the remaining] 2 cases, but they were operated on based on the wishes of the patients and/or their families.

About 90% of the 54 cases operated on had hemithyroidectomy (removal of one lobe of the thyroid gland).

Regarding the thyroid cancer in Fukushima, some experts raised a question, “Did all of the cases operated on actually need surgery?” and some have requested disclosure of the patient data. (Kyodo)