Official English translation of the results is available here.

A summary of the results is provided below:

Summary of fine-needle aspiration biopsy results (as of March 31, 2014) 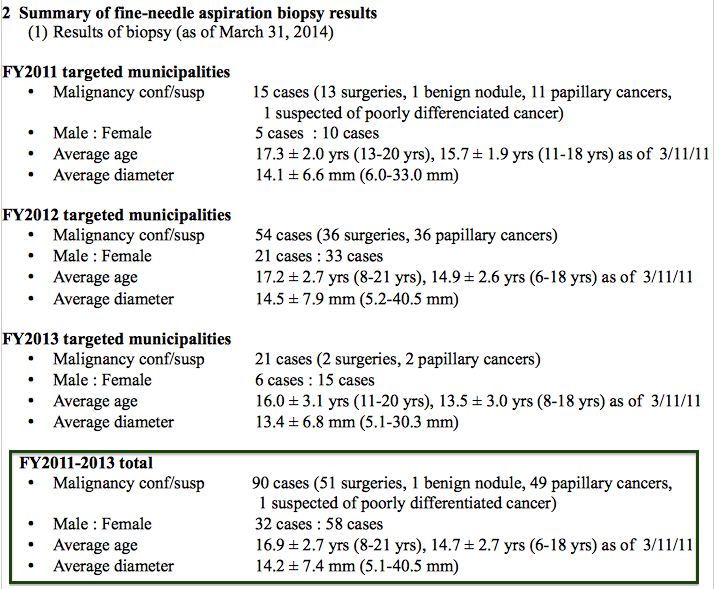 In summary, there were 17 more cancer cases confirmed since the last report on February 7th, 2014.

Of the total number of 89 confirmed and suspected cases, excluding one case which turned out to be a benign nodule, 50 are confirmed thyroid cancer cases and 39 have cytological biopsy results suspicious of cancer. As of February 7th, 2014, there were 33 confirmed and 41 suspected cases of thyroid cancer: 17 of 41 suspected cases were confirmed with surgery, while 15 more cases had cytological biopsy results suspicious of cancer as the secondary examination progressed. (1,598 of 2,070 eligible completed the secondary examination as of March 31, 2014. This means there is a potential for more cancer cases diagnosed for the initial round of thyroid examination.

As usual, no information was offered such as the type of nodules and also details of each surgical case which, as part of regular medical care, are considered beyond the scope of the screening and thus inaccessible to the Health Survey team.

Suspected cases are not always immediately scheduled for surgery. With 47 of the 89 confirmed/suspected cases being over 18 years of age at the time of the secondary examination, some opt to schedule the surgery at a more convenient time, while under observation. (Incidentally, once they turn 18, they no longer have free medical care promised to Fukushima children, and their medical care takes place under the national health insurance with co-payment required. This adds an extra burden to patients and families).

*****
Below is a reference table showing the 2010 thyroid cancer incidence rate per 100,000 in Japan, compiled from National estimates of cancer incidence based on cancer registries in Japan (1975-2010) on the website of Center for Cancer Control and Information Services, National Cancer Center, Japan. Due to an intense interest, domestically and internationally, in the pediatric thyroid cancer occurrence in Japan, the tables focused on the relevant age groups, including the age 20-24 group as some who were younger than age 18 at the time of the accident are now moving into this age category.


Note: The table shows “incidence,” representing the rate of occurrence of new cases in a given period. On the other hand, Fukushima thyroid examination is mass screening, which yields “prevalence,” the proportion of the total number of cases to the total population.

It is important to note that incidence and prevalence are not directly comparable, so the incidence rates shown above are only a relative measure of comparison.