On March 4-7, 2014, shortly before the third anniversary of the Great East Japan earthquake and tsunami and the subsequent Fukushima nuclear accident, an international conference was held, 25 minutes outside of Frankfurt, on "Effects of Nuclear Disasters on Natural Environment and Human Health," co-organized by the German chapter of the International Physicians for Prevention of Nuclear War (IPPNW) and the Protestant Church in Hesse and Nassau. (Program PDF here). 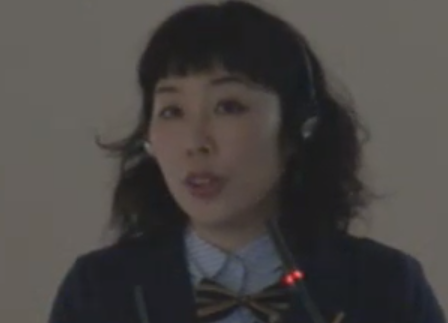 Mako Oshidori was enrolled in the School of Life Sciences at Tottori University Faculty of Medicine for three years, studying basics of medical research, before leaving school to go into comedy. Mako Oshidori is a regular at the TEPCO press conference, known for her sharp and tenacious questions. Mako Oshidori herself discovered a TEPCO memo telling officials to "cut Mako-chan('s question) short appropriately." As a freelance journalist, she covers not only the Fukushima nuclear accident but other important health issues such as Minamata disease and asbestos. Although she considers nuclear power plants unnecessary for Earth, she doesn't consider herself an anti-nuclear activist. She is simply a journalist investigating various health issues including the radiation exposure issues.

"Stunning Story from a Fukushima Daiichi Nuclear Power Plant Worker" is an example of her investigative report translated into English.

The transcript of her presentation has been translated into English below.
*****

My name is Mako Oshidori. I am sorry I speak in Japanese.

I would like to express my gratitude to the IPPNW, the Protestant church, and people in Germany, for giving me this opportunity to speak here today. This means a lot as there are not many opportunities given within Japan to widely publicize issues regarding the current situation in regards to the nuclear accident. Therefore, I was really surprised to discover, on this trip to Europe, that Europeans consider Japan as a free, democratic country.

As a journalist, I have attended the TEPCO press conferences more than anybody. I am considered a veteran journalist despite my younger age. The pressure is placed on me from different sources when I try to disseminate the information in media.

If I write one article about the nuclear accident for a magazine, the utilities industry group would demand to have pro-nuclear articles to be published in the same magazine three times. At the end, the magazine ended up not publishing my article. There was also the pressure from sponsors not to let me use the words such as a “nuclear accident” and “Tokyo Electric (TEPCO)” at all on television, when I would talk about the TEPCO nuclear accident. As a result, I was not able to go on television.

Japanese electric companies like to use nuclear power, and it was when the Japanese government decided to restart nuclear power plants, in order to continue using nuclear power last fall, that the government agents began following me for surveillance. I heard about it from researchers who were my friends as well as some government officials. I will show you a photo I secretly took of the agent, so you know what sort of surveillance I mean. 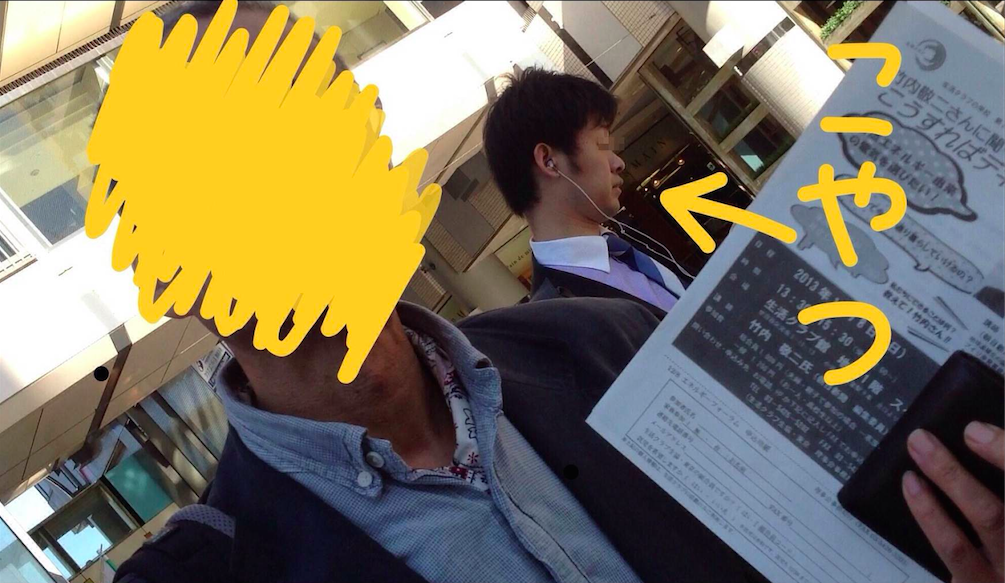 When I would talk to someone, a surveillance agent from the central government’s public police force would come very close, trying to eavesdrop on the conversation. The person I am talking to would ask me if the man was my manager. I would tell them that I had no idea who the man was and that I thought he was perhaps one of my groupies. Thus we are not given freedom of broadcasting whatever we want. There are some journalists belonging to major media outlets who do serious reporting on the nuclear accident, but they are under such pressure that the Japanese people are not informed of the realities of the nuclear accident even within Japan.

Next, I would like to talk a little about my interview of a nurse who used to work at Fukushima Daiichi nuclear power plant (NPP) after the accident. 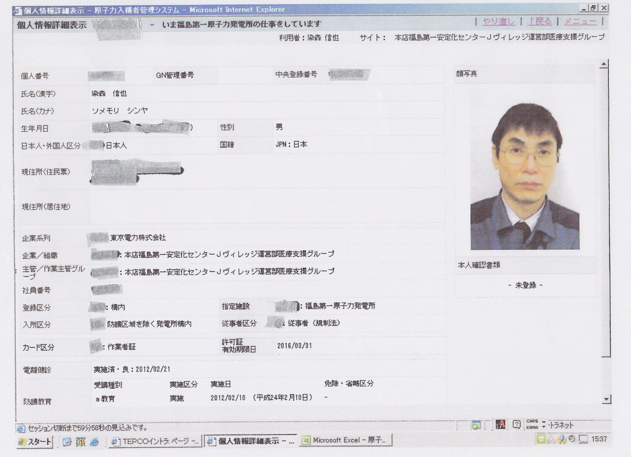 I would like to tell you about the realities of the nuclear power plant workers. He was a nurse at Fukushima Daiichi NPP in 2012. He quit his job with TEPCO in 2013, and that’s when I interviewed him. 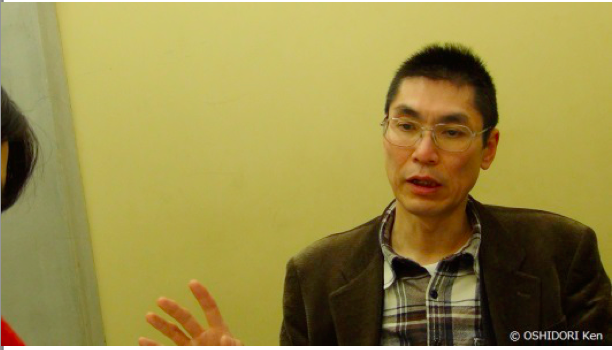 As of now, there are multiple NPP workers who have died, but only the ones who died on the job are reported publicly. Some of them have died suddenly while off work, for instance, during the weekend or in their sleep, but none of their deaths are reported. Not only that, they are not included in the worker death count. For example, there are some workers who quit the job after a lot of radiation exposure, such as 50, 60 to 70 mSv, and end up dying a month later, but none of these deaths are either reported, or included in the death toll. This is the reality of the NPP workers. There is too much pressure for me to write an article on this issue, so not many Japanese people know about it.

Next, I would like to briefly talk about when I interviewed some Fukushima mothers. 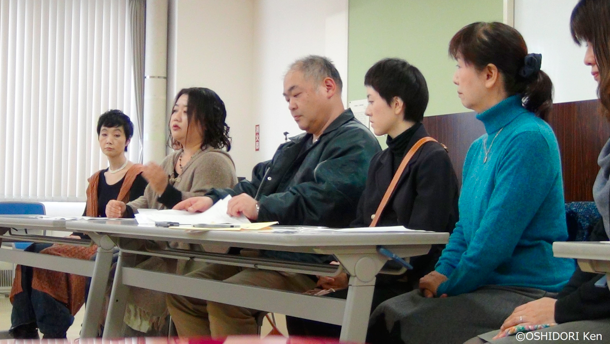 This is from when I visited Fukushima Prefecture in 2012 with a Belarusian researcher, Alexey Nesterenko, who is the head of BELRAD. 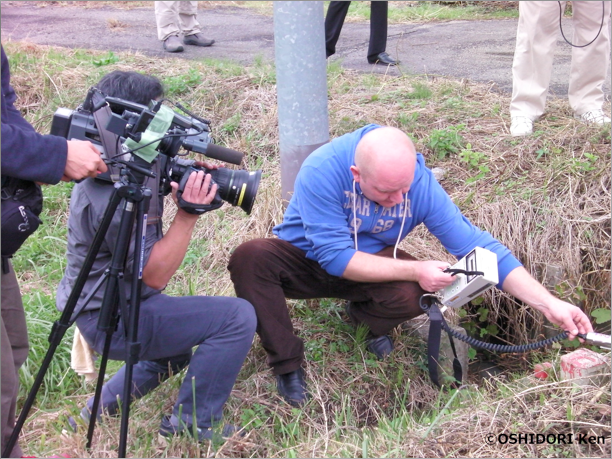 He was most surprised about an elementary school in Date City, Fukushima Prefecture. As you can see, in the section right by the fence next to the swimming pool, the radiation monitor is registering 27.6 μSv/h. 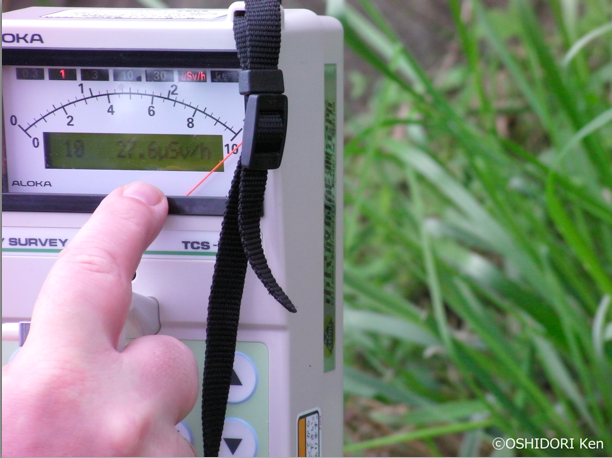 He asked me if the children at the school had evacuated, and I told him they were in class right then. He was extremely astonished and said that was the radiation level which would necessitate immediate, mandatory evacuation of the children in Belarus. He said he thought Japan was a wealthy country and wondered why children were in class there as if nothing ever happened. This area has an especially high radiation level. There are hot spots like this in Fukushima. 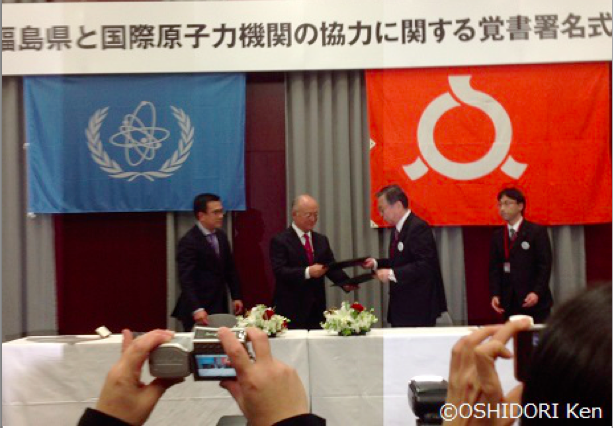 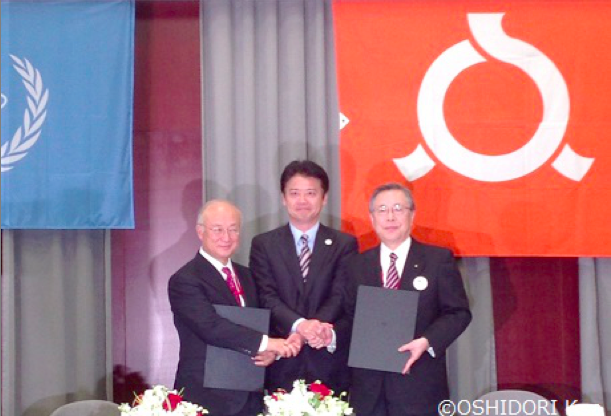 However, at the information session, Fukushima residents strongly opposed having IAEA, a pro-nuclear agency, involved with their health survey. After the press conference, I directly asked the Governor of Fukushima Prefecture what he thought of more than half the residents opposing to the cooperation between IAEA and Fukushima Prefecture. He answered that the residents would just have to understand it was necessary. 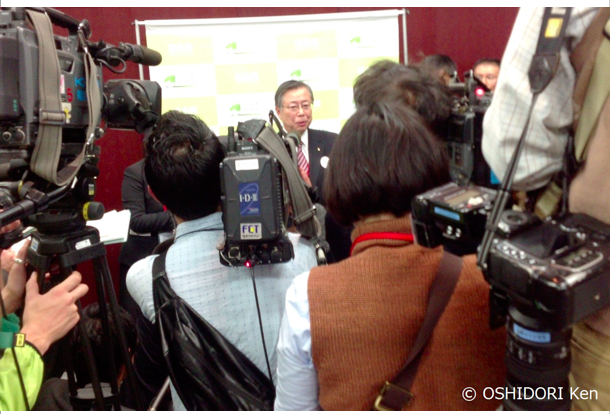 The agreement by IAEA and Fukushima Prefecture is a problem, but there is another problematic document. This is a document which was released in May 2011 by the Ministry of Health, Labour and Welfare and the Ministry of Education, Culture, Sports, Science and Technology to universities, academic societies and research institutions all over Japan. I am really sorry this is only available in Japanese. 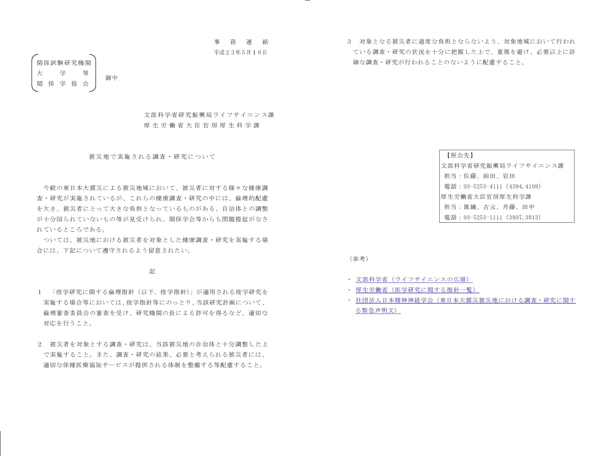 This documents is in regards to various research such as health studies carried out in the disaster areas and the contaminated areas after the Great East Japan earthquake, and it basically says detailed study should not be done without permission for the reason of avoiding burden on the residents. Before this document was released in May 2011, various university researchers and research institutions were in Iitate Village and other heavily contaminated areas in Fukushima Prefecture in March and April. Many research teams left Fukushima after this document was released. Currently, a large-scale health survey in Japan is being conducted only at Fukushima Medical University, designated by the Japanese government. Other studies are hardly being conducted now. 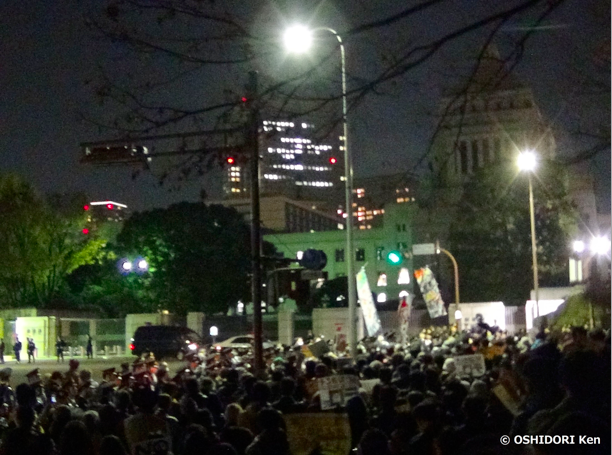 Every night, quite a number of people would show up to demonstrate. This is an interesting photo, although I hesitated to show it to people in Germany. Demonstrators wanted to say the current cabinet resembled Nazis. In fact, last August, the deputy prime minister Taro Aso said they should begin altering the constitution inconspicuously as Nazis did. 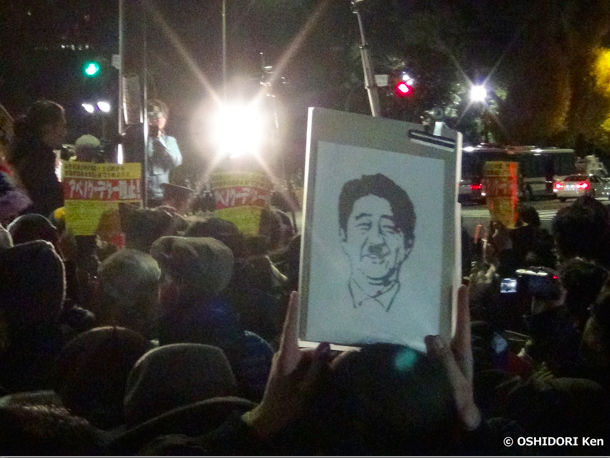 That prompted many demonstrations claiming the current cabinet was extremely problematic. 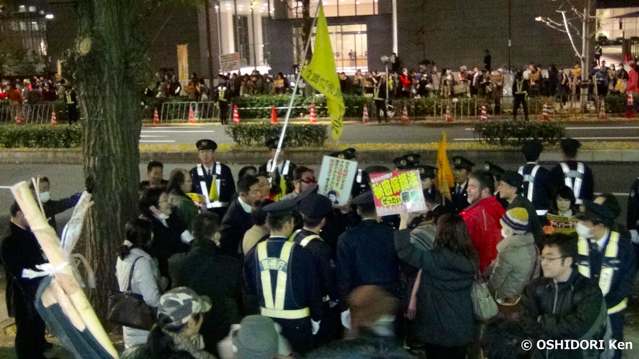 As you can see, you can’t say democracy is protected and human rights are respected in current Japan, and there will be pressure placed on you if you try to broadcast it. Therefore, I really feel thankful for this opportunity to speak to all of you in Germany, courtesy of IPPNW.

thank you for sharing , has there been any clean up , has the USA ever helped you to clean it up?
We in USA still do not understand how a tidal wave rose when there was an island between Fushishma and ocean.....
We think there was a hydrogen explosion that caused the nuke plant to explode, due to the amt of contaminated spent rods
on the roof.....we in America feel so sad about what has happened to your people.....75% of Nuke Plants in USA are also leaking
and our government continues to think they are safe....we feel they are purposedly depopulating the world so the rich can live here
underground 17 stories for awhile , but the entire world is being chemtrail sprayed and nuclear radiation very much leaking
we wish you health and hope....Pray to Jesus for help.....or meet us all in heaven someday , USA people dying here lots of cancer too.

The global corporate elite are very aware of the fact that the Fukishima meltdowns could serve as a universal idelodgical/ eco-political tipping point,which would galvanize the the masses against the neo-liberal agenda of said elites. Of course if awareness of the seriousness of these meltdowns remains obscured, as is currently the case,the meltdowns instead exist as a tipping point against the masses.We can only hope that this event was in fact a result of chance as oppossed to being a calculated stradegy on behalf of the corporate tycoons.As you may be aware there are ceartain people who do entertain the notion that this nuclear catastrophy was no mere accident.Okay folks move right along,there is nothing to see here,and besides in the corporate facist era, nuclear fallout is good for you,espeacialy since population reduction is the precribed remedy for the ''little people.''