Yutaka Kuwabara, aka Kuwa-chan, used to work as a radiation administrative worker at the Fukushima Dai-ichi nuclear power plant (FDNPP), participating in technical investigation, primary loop recirculation system duct renovation, and detailed checkup of turbine. Also having engaged in natural farming, he used to live in Namie Town, Fukushima, within 20 km of the FDNNP. He and his late-wife, who died of cancer in March 2013, evacuated to Saitama Prefecture shortly after the FDNPP accident following the Great East Japan Earthquake and tsunami on March 11th, 2011. After the accident, Kuwa-chan became so disgusted with how much information was covered up both by TEPCO and the Japanese government that he has grown vocal on Twitter and in his blog, sharing his expert knowledge and educating general public about radiation. He has been going to various parts of Fukushima Prefecture, totally at his own expense, to take radiation measurements and conduct decontamination all on his own.

On June 22, 2013, he happened to come by the "Yanagawa-kibōnomori-kōenmae Station" in Yanagawa Town, Date City, Fukushima Prefecture, about 60 km northwest of the FDNPP. ("Yanagawa-kibōnomori-kōen" is the name of a recreational park, literally translated to "Yanagawa Forest of Hope Park," and the station name indicates it is "in front of" the park, although the park itself is about a ten-minute walk away). He noticed the air dose rate was rather high at the station. The station manager asked him to take measurements in and around the station building. He discovered an air dose rate of 1 μSv/h, which prompted him to conduct immediate decontamination. He returned to the station the following day to take detailed measurements of the station platform as well as the traffic circle in front of the main entrance to the station. He then conducted decontamination beginning with the area with the most foot traffic. 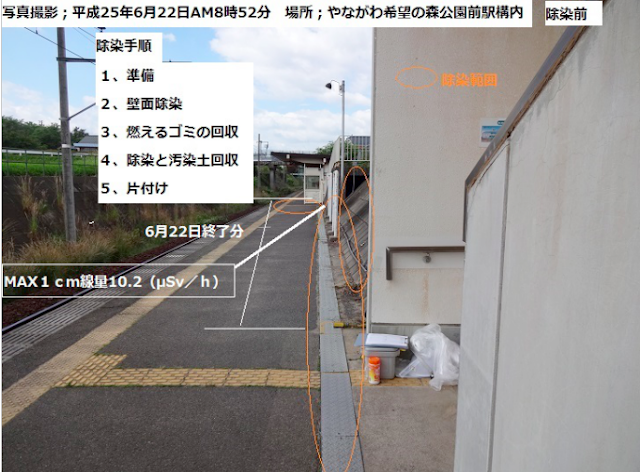 The station platform after decontamination on June 23, 2013.
Numbers in orange boxes indicate air dose rates at 1 m high above the gutter before and after decontamination in μSv/h, and white lines indicate decontaminated areas, the same as orange elliptical shapes in the previous image. Radioactively contaminated dirt in the gutter could not be removed without a proper radioactive waste drum can. Kuwa-chan asked the station manager to request three drum cans. The surface dose rates on the gutter cover ranged from 0.4 to 1.05 μSv/h, and he warns to stand 50 cm away from it. 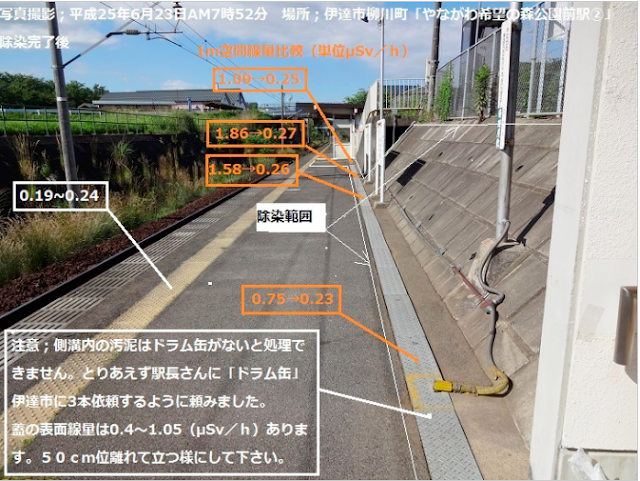 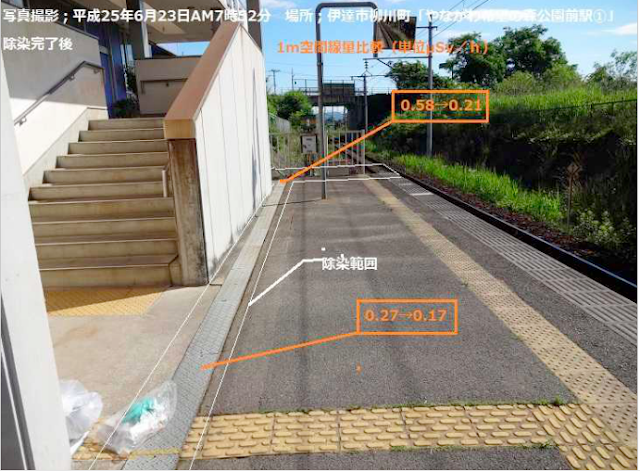 The radiation dose map of the station platform based on radiation measurements (in μSv/h) taken in early morning (4 to 4:30 am) of June 24, 2013. 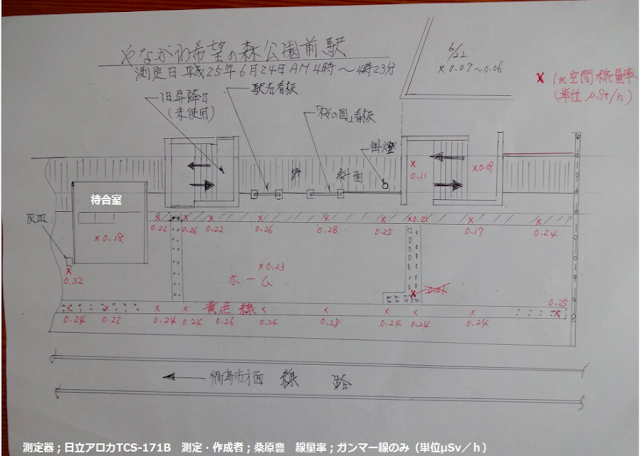 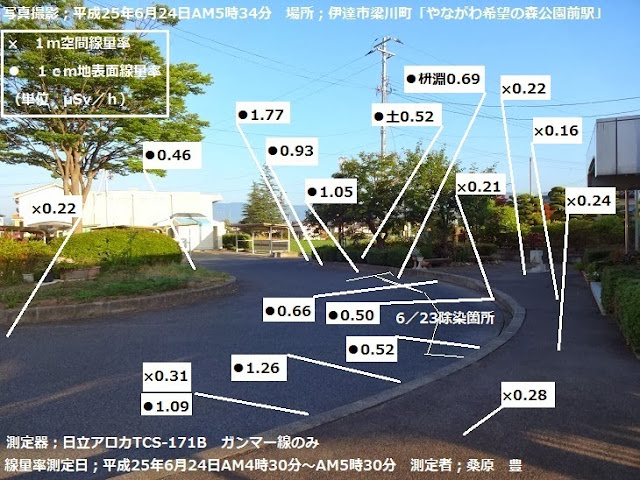 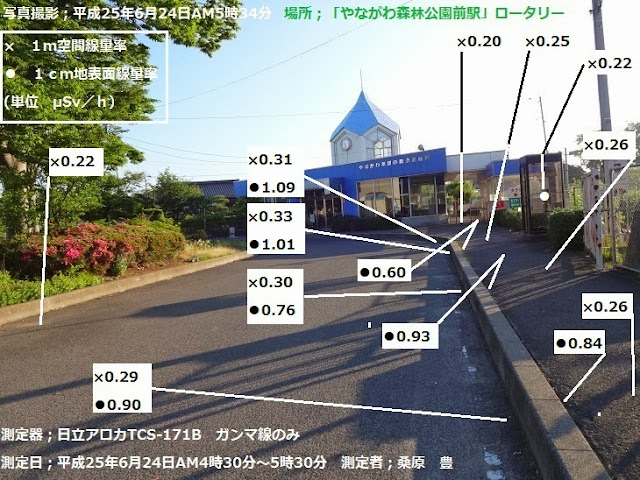 Elementary, middle and high schools in Yanagawa Town, Date City, are all located near this "Yanagawa-kibōnomori-kōenmae Station." Students also commute to this station from the adjacent stops such as "Yanagawa Station" and "Hobara Station." Many students wait for family members to pick them up on the sidewalk at the traffic circle in front of the station entrance, often sitting on the concrete curb of the sidewalk.

This dose distribution map was created after radiation measurements were taken on June 24, 2013, of areas decontaminated on June 22 to 23, 2013. The surface dose rate of the concrete curb where the students would sit waiting to be picked up was 0.93 μSv/h in only gamma radiation. 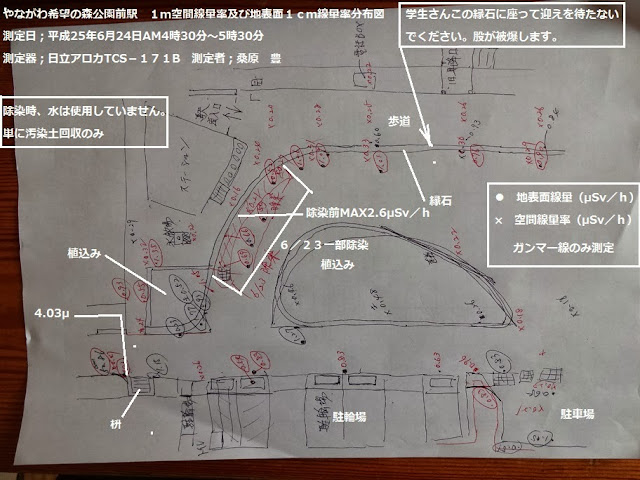 Kuwa-chan was asked by children to decontaminate areas where they can sit by July 15, 2013, the last day of the three-day weekend in mid-July. He promised them that he "would clean from the station entrance up to the telephone booth by the end of the three-day weekend." He kept his promise.  He also told them not to sit on the sidewalk curb past the telephone booth. Fortunately, the station manager of the "Yanagawa-kibōnomori-kōenmae Station," also running the station eatery "Hachiman," has trusting relationships with the children, always watching over them and telling them not to sit on the sidewalk curb.

In the July 14, 2013, videotape shot by Jun Onishi, also known as his Twitter account name, @Birdhairjp, Kuwa-chan's careful and meticulous decontamination work is depicted.  (Incidentally, Onishi is the person who videotaped and collected the extremely radioactive roadside dust in Namie Town, described in this post).


Kuwa-chan said he was finishing up the decontamination work when this videotape was shot. It was a hot and humid summer day, and he tried his best not to sweat, as the the contaminated material will go through the Tyvek protective coverall if it's wet from the sweat; he was wearing the Tyvek coverall over just an underwear. All the equipments shown, including the Tyvek protective coverall, face shield, mask, decontamination tools and radiation monitors are privately paid for and owned by Kuwa-chan. The radioactively contaminated dirt removed from the area is being stored in a secure drum can on a private property.

During the time period when he was engaged in the decontamination work, Kuwa-chan was usually there when people were off work and school, or early morning before the commuters began arriving, such as 4 am, taking care to avoid when the foot traffic was heavy. On no school days, he was cheered by students coming to school for club activities. One six-grade girl would watch him work from distance, watching him until he finally managed to finish the job on July 15, 2013. As he was leaving, she asked, "Are you going back to Saitama?" He asked her, "Yes. Do you want me to come back again?" He still remembers how she adoringly nodded, "Yes."

Kuwa-chan says, "What I am doing is a very small act. I am doing it, in the hope that children who are stuck in contaminated areas could avoid even a little bit of radiation exposure. Also, I wanted to show them how to decontaminate properly, so that they will learn how to decontaminate and protect themselves if they cannot move away from contaminated areas, so that ultimately they will be self-sufficient. Moreover, I wanted them to know the reality. It looks odd for them to see someone wearing the Tyvek protective suit, face shield, and mask, but I wanted to emphasize this was the proper decontamination attire."

Furthermore, when the station manager reported the radioactive contamination levels of the "Yanagawa-kibōnomori-kōenmae Station," to Date City officials, they told her it was only the station building itself that was under jurisdiction of the city, not the traffic circle and the platform. Although Kuwa-chan had asked the station manager to get from the city three drum cans for storage of radioactive soil from further decontamination work, the city never provided them. Anecdotal stories from the local residents offer an insight into the stance of Date City's Civic Life Department Radiation Management Division: They are busy trying to convince residents radiation is harmless and manageable.

By the way, Date City has multiple hotspots. In particular, Oguni Elementary School, featured in this post and featured in a documentary by Ian Thomas Ash, "A2-B-C," is well known to have highly radioactive hotspots outside the school property. (In this video, the air dose rate is shown to be 0.66 μSv/h in April 2013, which apparently used to be 1.67 μSv/h a year ago before decontamination was done, indicated by green tarps covering the ground).

Kuwa-chan says angrily, "The local government is not putting enough resources into decontaminating places where the children can be most exposed to radiation, such as the walking routes to schools. Instead, they are focusing on the inside of school property and parks, or even agricultural fields and mountains where decontamination is not very effective. They don't understand behavior of children. This country says children are precious, but they are not protecting them."

One individual diligently continues meticulous decontamination work, in places ignored by the national or local government.

This decontamination work has a postscript.

Kuwa-chan did not just conduct decontamination, but he actually sent the environmental samples, removed from the sidewalk curb where children were sitting, for the radiological analysis. The photo below shows where the samples were collected. 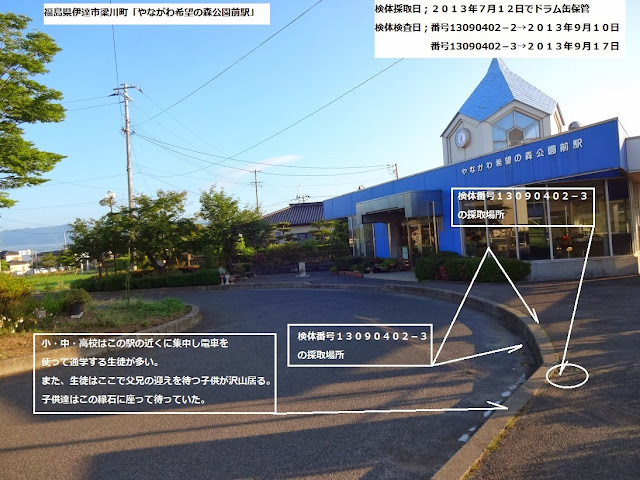 The results of the radiological analysis are shown below. The sample collection date is incorrectly noted as July 2, 2013, but it was actually July 12, 2013. In all analyses, the measurement time was 30 minutes, and the cesium measurement is decay corrected to the collection date. A Germanium gamma detector and a nuclear spectroscopy analytical program InterWinner, both by French company, ITech, were used.

The first two results are for the sample number 13090402-2, collected on July 12, 2013 and analyzed on September 10, 2013. (The photo above shows two sample collection spots with the same sample number, but this result, actually mislabeled in the image as 13090402-3, is for the sample collected from the inner edge and the bottom part of the curb closer to the station entrance). 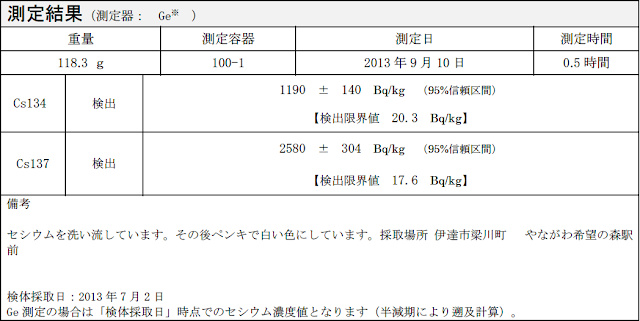 The last analytical result is for the sample number 13090402-3, and it's collection spot is labeled with the correct number and indicated with a circle in the sidewalk on the inside of the curb in the image above.

The image below shows the type of tools he was using in decontamination work and the areas where he was decontaminating. 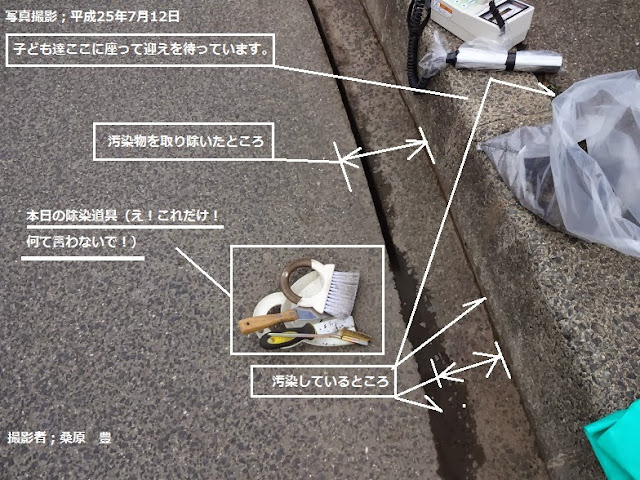 This detector, the Aloka gamma survey meter TCS-171, shows the amount of gamma radiation alone on the curbside: 1.73 μSv/h. 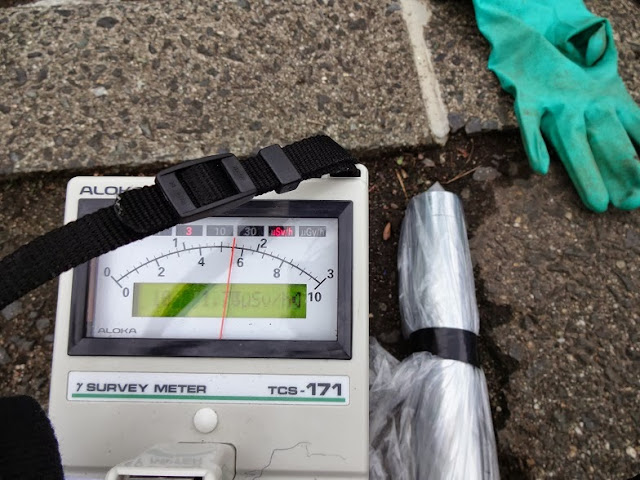 This detector, Inspector, shows a combined reading of beta and gamma radiation on the curbside: 3.649 μSv/h. 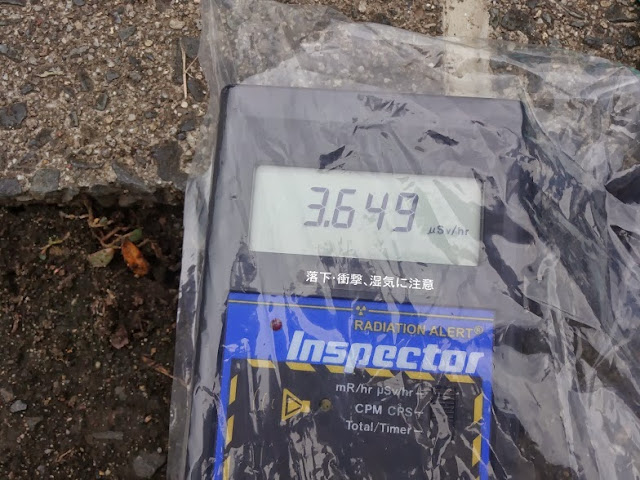 What a mess! Thank you for your idealistic work!