The Seventeenth Prefectural Oversight Committee convened in Fukushima City, Fukushima Prefecture, on December 25, 2014, releasing the latest results of thyroid examination, consisting of Initial Screening or the first-round (originally scheduled to be conducted from October 2011 to March 2014, but actually still ongoing) and Full-Scale Screening or the second-round (beginning April 2014).

An official English translation of the results is available here.

Initial Screening targeted about 368,000 individuals who were age 18 and younger, residing in Fukushima Prefecture at the time of the Tokyo Electric Fukushima Daiichi nuclear power plant accident on March 11, 2011. About 80% of those eligible have undergone the primary ultrasound examination, either in Fukushima Prefecture or in other prefectures where they have relocated to. Full-Scale Screening, to be conducted every 2 years until age 20 and every 5 years after age 20, additionally targets those who were born in the first year after the accident, aiming to examine approximately 385,000 individuals in a 2-year period.

Notably, there was a leak of information the day before the committee met, pertaining to four cases from Full-Scale Screening discovered to be suspicious of malignancy, as described in this post. These four cases caused quite a shock as Initial Screening, considered to provide a baseline incidence rate from the prevalence rate obtained as a result of the wide-scale screening, supposedly would have detected all the cases with "pre-existing" tumors. These "pre-existing" or "latent" cancers would have been discovered before becoming symptomatic due to screening. (It is important to note that Shinichi Suzuki, a Fukushima Medical University thyroid surgeon in charge of the thyroid examination, has steadfastly declined to provide the number of children--some are now adults, over 3 years after the accident--who might have had subjective symptoms). In other words, the incidence rate from the second-round of screening would be expected to be lower.

The four cases, 3 males (ages 6, 10, and 17 at the time of the accident) and 1 female (age 15 at the time of the accident), were either A1 (2 cases) or A2 (2 cases) in Initial Screening. Suzuki was grilled about whether these might have been missed diagnoses in Initial Screening, both during the committee meeting and the press conference, and he flatly denied such possibilities stating the retrospective review of the ultrasound images did not reveal any missed lesions. This, however, means the tumors newly arose since Initial Screening in at least 2 of the cases previously classified as A1, which by definition had no nodules or cysts. Suzuki refused to provide the tumor diameter and the speed of tumor growth for each of the four individuals, citing that they were no longer considered part of the screening and thus patient privacy overruled any other obligation for information release.

The male to female ratio of 3:1 is also unexpectedly high, as thyroid cancers are usually more common in females, except as discovered after the Chernobyl accident. However, Suzuki stated that nothing conclusive can be drawn from merely 4 cases, and they would have to keep an eye on the future development. Eventually Suzuki used these 4 cases to emphasized the importance of participating in Full-Scale Screening even though the Initial Screening result was normal, as in A1.

If Suzuki was at all puzzled by the contradiction presented by the situation, he did not show it. An unexpectedly high prevalence rate of thyroid nodules and cancer detected in Initial Screening has been attributed to the highly sensitive ultrasound equipment picking up very small tumors. Today Suzuki emphasized the limitation of ultrasound as it might not always detect what's there. Also, Suzuki has repeatedly mentioned how slowly thyroid cancers grow. Then why did these 4 cases become detectable in two and a half years or less? It seems as if he is hiding behind "patient privacy" so as not to reveal some inconvenient truths.

A summary of results are provided for Initial Screening and Full-Scale Screening.

Overall, the number of suspicious or confirmed of malignancy is 113, including a case of post-surgically diagnosed benign nodule. (This number might be referred to as 112, excluding the benign nodule case). Of these, 84 are surgically confirmed as thyroid cancer (81 papillary thyroid cancer and 3 poorly differentiated cancer) and 29 are suspicious of malignancy awaiting surgery, including 5 new cases from Initial Screening and 4 from Full-Scale Screening.

In regards to detailed characteristics of some of the malignant cases, such as metastases, staging, surgical methods, and genetic analysis, refer to this post describing information gathered from various sources. (Such information is not readily provided, as biopsy as well as surgical cases are technically no longer part of the screening and personal data is guarded, almost over-rigorously).

*****
Below are translations of some of the tables in the results.

Table 2. Number and proportion of participants with nodules/cysts as of October 31, 2014

Table 3. Secondary examination: progress and results as of October 31, 2014 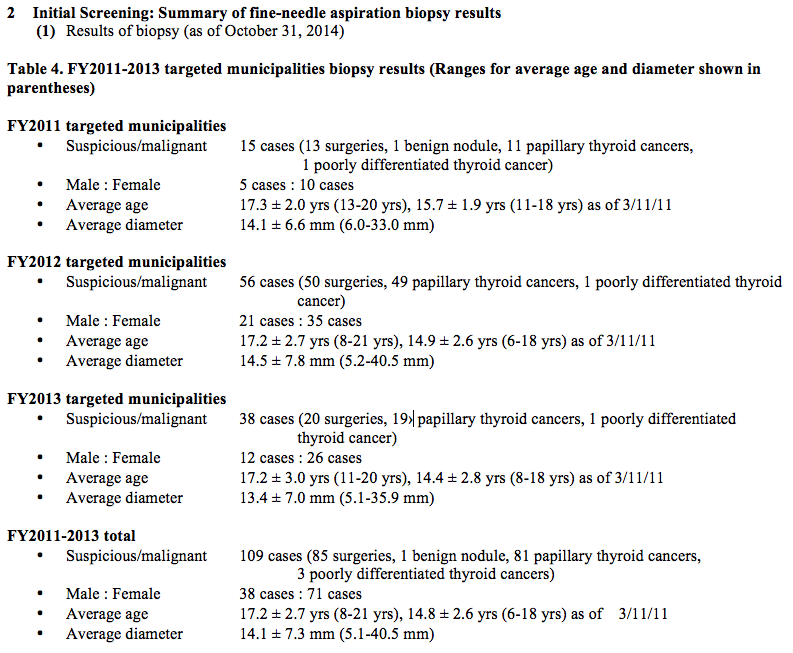 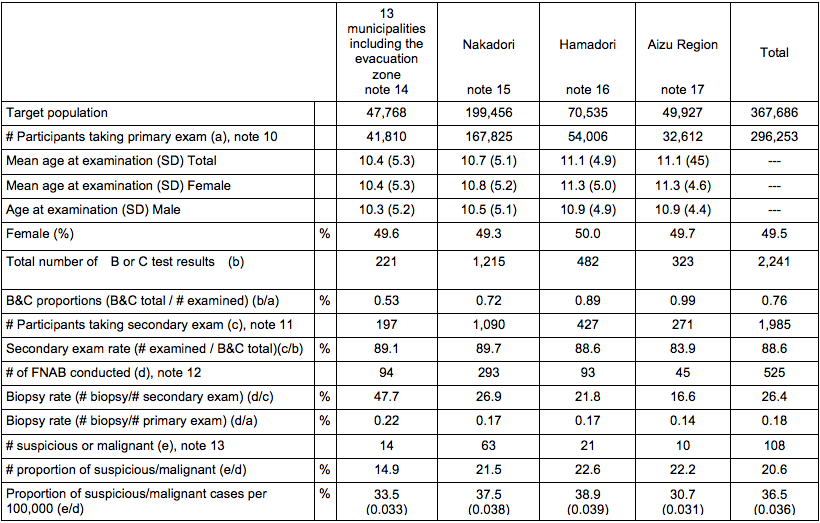 Table 2. Number and proportion of participants with nodules/cysts as of October 31, 2014 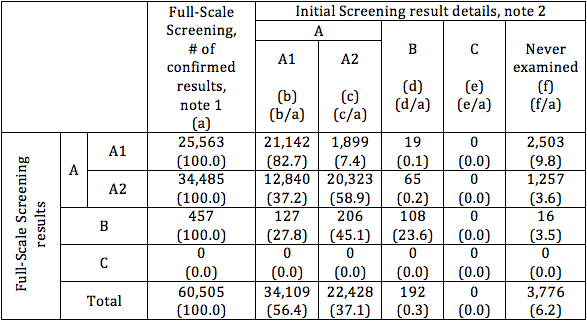 Also notable is the fact that, of the 3,776 previously unexamined individuals who participated in Full-Scale Screening, 16 were classified in the diagnostic category of B.

Table 4. Secondary examination progress and results as of October 31, 2014

Overview      On May 17, 2021, t he 41st session of the Oversight Committee  for the Fukushima Health Management Survey (FHMS) convened on... 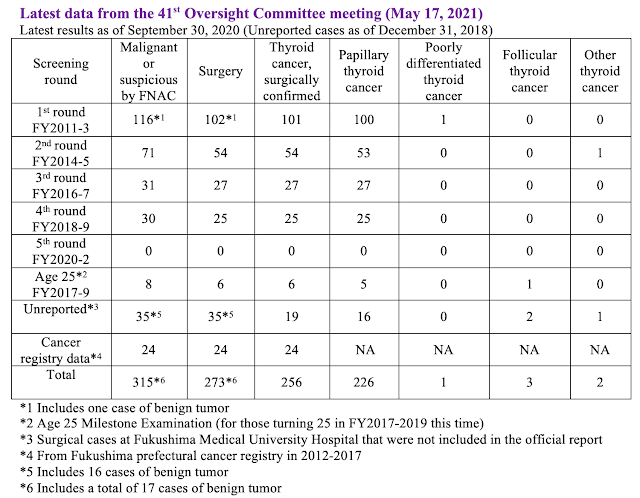