Sixteenth Prefectural Oversight Committee for Fukushima Health Survey convened on August 24, 2014, releasing the latest results of the thyroid examination, consisting of the near-complete results of the preliminary examination over the last three years, intended to obtain a baseline, as well as the partial results from the regular examination, which will keep track of any changes.

Official English translation of the results are available here.

A summary of the results of the preliminary examination is provided below:


Translation of some tables from the results of thyroid preliminary examination: 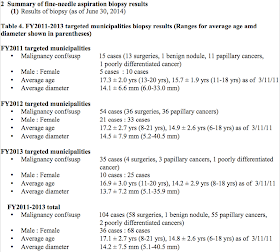 In our thyroid examination, participants who are found to be in the B or C assessment category during the primary examination go onto the secondary examination. Biopsy is recommended based on the findings of the repeat ultrasound examination. If the biopsy shows confirmed or suspected malignancy, they will be treated according to the above indication criteria, with adequate informed consent.

In addition, treatment guideline mentioned above has been discussed at the Diagnostic Criteria Assessment Subcommittee of the Thyroid Examination Expert Committee, consisting of specialists from related specialty societies.

In summary, there were 14 more cancer cases, 4 boys and 10 girls, confirmed since the last report on May 19, 2014. All 14 cases came from the FY2013 targeted municipalities, where the secondary examination is still ongoing.

In the Asahi Shimbun article, released in the morning of August 24, 2014 and contained apparently leaked information, Fukushima Medical University was quoted as saying it was unlikely that these cancer cases were related to radiation exposure.

Although the data is incomplete as the results from the Aizu area, part of the FY2013 municipalities, are not all available, a table was provided for regional comparison.

Page 10
Table 9: Proportions of subjects in B&C assessment categories as well as confirmed/suspected of malignancy (provisional) 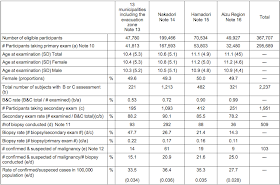 A regional analysis was conducted of 295,689 participants who underwent the primary examination, excluding those who were confirmed to be duplicate entries and those whose results have not been finalized.
The result of the analysis revealed the rate of assessment categories B & C tended to increase in the order of “13 municipalities including the evacuation zone,” “Nakadori,” “Hamadori.” and Aizu Region.

On the other hand, the rate of of those “confirmed or suspected of malignancy” was almost the same in “13 municipalities including the evacuation zone,” “Nakadori,” and “Hamadori,” and slightly lower in “Aizu region.” This could be due to the fact that Aizu region has a lower proportion of secondary examination participants who actually completed it.

As a reference to grasp the geographical relationship of these regions, the map below, excerpted from the August 25, 2014 Fukushima Minyu article, color-codes the above comparison regions.
Red: 13 municipalities including the evacuation zone
Blue: Nakadori
Yellow: Hamadori
Green: Aizu region 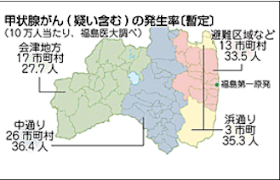 However, this particular grouping of municipalities to form comparison regions is drawing some criticisms as it may not be a good reflection of how the radioactive plume spread. For instance, Hamadori as defined here, which is not exactly the same as the conventional Hamadori, clumps Iwaki City where the highly radioactive plume hit, together with two municipalities up north on the Fukushima-Miyagi border, which did not receive as much plume. Also, a municipality might not be uniformly contaminated depending on its topography.

As for the partial results of the regular examination (the second round of examination), 28,575 have gone through the primary examination from the 2014 targeted municipalities, out of 213,223 eligible, and results have been determined for 6,458 of them. There were 46 in the B assessment category, but it was unclear if all of these individuals were also in the B category in the preliminary examination, or if any of these cases are newly diagnosed.